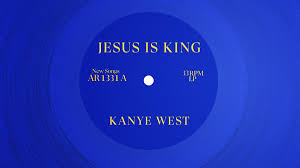 On October 25, 2019 Kanye West dropped his ninth project titled “Jesus Is King”. Though a divergent gospel experience, I have to say that I thoroughly enjoyed it.

The start of the album sets the tone by letting you know that Ye and his Sunday Service choir will be singing until the power of the Lord comes down. We all know that Mr. West is no stranger to using the name Jesus as one of his biggest singles is titled “Jesus Walks”, but this time instead of using the Gods’ name to challenge mainstream that the record won’t get played, He’s declaring Jesus as his Lord and Savior.

With production credit from Timbaland and Pierre Bourn, the minimal use of drum programming allows you to focus on the textures and message that JIK brings. Songs like the witty “Closed On Sunday” allows you to zoom into the fact that Kanye is merely asking us to set Sunday to forget about social media and focus on our families. Let’s not forget the heartfelt pray the he gave us on “Water” that’s asking God to purify our mind, body and soul. With lyrics like “Clean us like the rain in spring, take the chlorine out our conversation, let your light reflect on me, I promise I’m not hiding anything it’s water, we are water, pure as water, like a newborn daughter” it’s hard at this point for me not hear the sincerity of Ye’s heart.

Though many in the Hip Hop community are skeptical of Kanye’s motive, Ye chose to address the flack that he’s been getting from the Christian community on the song titled “Hands On”, with a striking repetitive line that says “what have you been hearing from the Christians? They’ll be first ones to judge me, make it feel like nobody loves me” the song also features a nostalgic Commissioned-esqe vocal performance from gospel legend Fred Hammond.

While this projects’ textures are synth and pad based. Ye doesn’t shy away from his hip hop roots by revisiting his early soulful sampling style on “Follow God” and giving us a huge moment in hip hop by reuniting the legendary rap duo Clipse(Pusha T and No Malice) on “Use This Gospel”.

Many have reviewed Jesus Is King as “Trash”. Though it may not be your favorite musically. I’m viewing this as a spiritual progression not perfection project. We’ve all watched Kanye go from No Church in the wild to Sunday Services in Jesus name. And though he may not have altogether yet, let me ask you this…Who really does? Salute to you Mr. West on your spiritual journey. I’m giving Jesus Is King a solid thumbs up personally. I love it!
Signing out, #TheHipHopJunkie💉