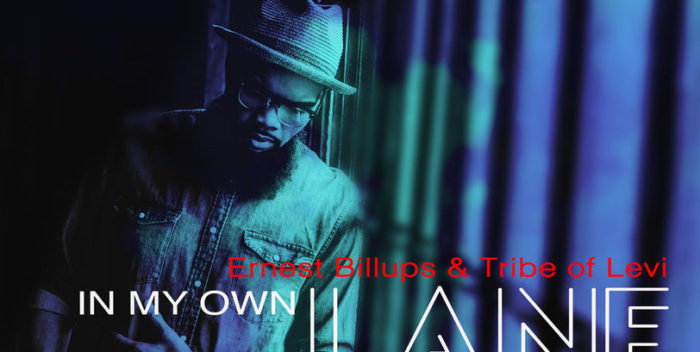 Ernest Billups and Tribe of Levi Present In My Own Lane

New York’s own Ernest Billups and Tribe of Levi will release their first full-length album, In My Own Lane on November 15th.  The disc is already available for pre order on digital outlets.   The twelve-track album from E’mazin Entertainment showcases the talents of Ernest’s immediate family as well as his extended musical family.

“That’s what’s special about this project,” Ernest said. “It gives a platform to those who have been rocking with me for a very long time—from singers to musicians to producers. As a result, the album contains a diverse range of songs and styles.”

Among the family members who appear on In My Own Lane are Ernest’s mother, gospel recording artist Angela “Missy” Billups. Missy teams with Tribe of Levi veteran Hannah Brown on the churchy “For Your Blood.” Ernest said that although he has produced many of his mother’s records, this is the first time she has appeared on one of his projects. “It was cool to reverse the roles,” he said, then laughed, “and push her out of her comfort zone a little bit!”

Ernest’s sister, also named Angela Billups, solos on “The Cross.” He wrote the hymn-like piece right after Hannah and his mother finished recording “For Your Blood.” “I was still stuck on ‘For Your Blood,’ thinking about the Cross and the Resurrection,” he said. “I felt like something more should be added to the subject. I came up with a little melody and it turned into a full song. It was only supposed to be two minutes long, but when we finished, it was a full track!”

He added: “Angela has been in Tribe of Levi from day one. She heard ‘The Cross,’ she wanted to sing it and she exceeded my expectations!” He is now in the process of producing her debut solo project.

Two other Tribe of Levi long-timers, Izaiah Graves and David Khaleel, solo on “How Good God Is” and “Jesus is Mine,” respectively. New Jersey’s own Hassan McMillan, aka Brother Hahz, provides the rap interlude on “Matthew 6.”

In addition to new songs, In My Own Lane includes the group’s recent singles: “Victorious,” featuring Bishop Eric McDaniel, and the explosive “God is Doing It,” Ernest’s duet with C. Ashley Brown-Lawrence. There’s a remix of “Scream,” with rapping from Ismael Torres. “For the remix, I changed the ending from ‘I can’t take it’ to ‘I can make it,’” Ernest explained, “so the song is even more encouraging.”

Producers who leave their distinctive imprint on In My Own Lane are Phil Jones, Ron Black, and Shajuan Andrews. Andrews, Ernest’s cousin and a musician with Hezekiah Walker, produced “Oh Give Thanks.” It was the last song Ernest wrote before finishing the album and it almost didn’t make the cut. But Andrews liked the song, persuaded Ernest to let him produce it, and said if he didn’t like the result he didn’t have to use it. “He did a phenomenal job and I included it!” Ernest said.

The Caribbean groove on “Jesus is Mine” is a touch Ernest has wanted to add to his music for some time but lamented that “my group and producers weren’t a big fan of it. After struggling with what other people thought, I finally decided that God gave me this song and I’m going to do it. Then hearing other gospel artists do Caribbean-style songs, I thought, why not? Plus, I grew up in a church that is Caribbean-based.”

Ernest’s inner conflict over whether to go with the flow or be original inspired the album title. “Until about two years ago,” he explained, “I struggled about being myself, being original. Now, I’m not trying to be anybody but Ernest—in my own lane.”

Ernest Billups looks forward to November 15, when the album that has been a work in progress for the better part of three years finally sees the light of day. More importantly, he is grateful to reveal what can be accomplished when singers, musicians, and producers work together for the greater good. “As artists we want to do our own thing,” Ernest said, “but I feel like we’re better together.”

About Ernest Billups & Tribe of Levi

Ernest Billups organized the gospel group Tribe of Levi from members of a community choir he directed. Together, they have taken their distinctive gospel sound to programs all around the East Coast. They appeared on TBN’s Praise the Lord television program and in 2014 released the five-track EP It Was You. They were nominated for five Rhythm of Gospel Music awards in 2018. Ernest is also a producer and CEO of E’mazin Entertainment, which offers affordable recording options for independent gospel artists.