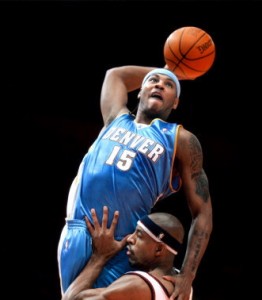 The four-time All-Star got his wish Monday night, being traded to the New York Knicks in a nine-player deal with the Denver Nuggets that continues the amassing of star players in major markets.

Anthony, guards Chauncey Billups and Anthony Carter, center Shelden Williams and forward Renaldo Balkman will go to New York, in exchange for guard Raymond Felton, forwards Danilo Gallinari and Wilson Chandler, center Timofey Mozgov, the Knicks’ first-round pick in 2014 and second-round picks in 2012 and 2013 originally acquired from Golden State, along with $3 million in cash. In a separate deal, the Knicks will send unused center Eddy Curry’s expiring contract, along with forward Anthony Randolph and another $3 million, to the Minnesota Timberwolves for small forward Corey Brewer.

Anthony will now join fellow All-Star Amar’e Stoudemire to form a potent one-two scoring punch for New York, with the Knicks hopeful that Anthony and Billups can play in coach Mike D’Antoni’s high-tempo style. Both played well for the U.S. Olympic team in recent incarnations, when D’Antoni was one of the U.S. team’s assistant coaches.

The deal ends a seven-month saga in which Anthony and his representatives controlled the process, leaking his desire to be moved to New York last summer and consistently making it clear that Anthony would not sign a three-year, $65 million extension offer that the Nuggets had on the table. Nor would he sign the extension if the Nuggets traded him to the New Jersey Nets, the team that tried long and hard to acquire Anthony with a variety of trade offers, involving three teams, four teams, multiple first-round picks and rookie forward Derrick Favors.

“He wanted to be in New York, and we worked with him and his people,” a Nuggets team source said Monday night. “We worked it out. It’s a win-win. You never get fair value for a player like that, but we have to move on as an organization. I don’t think the fans have gotten the true Nuggets this season” with the constant distractions.

In the end, the Knicks amended their “final” offer from last weekend and included Mozgov, the NBA rookie (he played six seasons overseas before coming over this year) center. Having a young big man to potentially replace either Kenyon Martin, a free agent after this season, or starting center Nene, who’s also up after this season, was crucial for Denver.

Moving Gallinari, a favorite of team president Donnie Walsh, indicates the level in which owner Jim Dolan took control of the process. Walsh got the Knicks back to respectability with the acquisitions of Stoudemire, signed to a $100 million deal last summer, and Felton ($21 million). But numerous reports indicated that both Walsh and D’Antoni were reluctant to move so many players for Anthony, forcing the Knicks to issue a statement Sunday claiming Dolan, Walsh and D’Antoni were all on the same page and agreed with the pursuit.

The Nuggets view the 23-year-old Chandler as one of the league’s better young small forwards, superior to any that they would have been able to get on the open market in free agency or in the next couple of drafts. They had better, as they just traded away a franchise level player in Anthony to get him. Felton, 26, in his first season in New York after playing his first five seasons in Charlotte, played extremely well the first half of the season for the Knicks after signing a three-year deal, and will challenge Denver’s young backup point Ty Lawson for the starting job. Gallinari is a “stretch” four who can spread the floor, and the 24-year-old Mozgov is a physical, hard-playing big man.

Denver is now likely to move forward Al Harrington, whom it signed to a five-year, $33 million free agent deal last summer. The Nuggets may also move Nene, who’s likely to receive significant free agent offers next summer. The Rockets, looking for a long-term replacement for Yao Ming, are one potential landing place for Nene.

For their part, the Nets will now move on, a league source said, to the free agent class of 2012, which will include All-Stars Dwight Howard and Deron Williams. Owner Mikhail Prokhorov is determined to add at least two superstar players before his team moves into its new arena in Brooklyn that year. The Nets hoped Anthony would be one of those stars, but now, the Nets may have to try for a bigger splash in 2012 along the lines of what Miami pulled off last summer with the signing of LeBron James and Chris Bosh to go with Dwyane Wade.

The Nets, the source said, will proceed with trading starting point guard Devin Harris and forward Troy Murphy, who has not been with the team for weeks while it tried to arrange to deal him. Murphy could go to Golden State, but potential deals with Cleveland and New Orleans, and possibly Denver, are still possible. Harris has long been rumored to be going to Portland in a deal that would bring Andre Miller from the Trail Blazers, but that deal may be on the back burner while New Jersey explores other possible deals.

The Nuggets decided that the combination of young players coming from New York would be just as good as the draft picks they would have gotten from New Jersey. With the protections on some of those first-round picks — one was protected through the seventh pick overall the next two years, and then converted into two second-round picks — Denver preferred Chandler, Gallinari and Mozgov. Once the Knicks agreed to include Mozgov in the deal, the trade was finalized.

“I don’t know if I can say we wouldn’t have done it” without Mozgov, the team source said. “But we got him.”

There were reports Monday that the Nuggets were considering re-routing Gallinari and Mozgov to New Jersey in exchange for two first-round picks. But Denver GM Masai Ujiri said that would not be the case. “We brought those guys in to play for the Nuggets,” Ujiri said.

The 34-year-old Billups would have asked for a buyout from the final year of his deal, paying him $14.2 million next season, if he had been sent with Anthony to the Nets. But he is much less likely to do that in New York. Billups likes D’Antoni and would certainly have no problems playing in such a system.