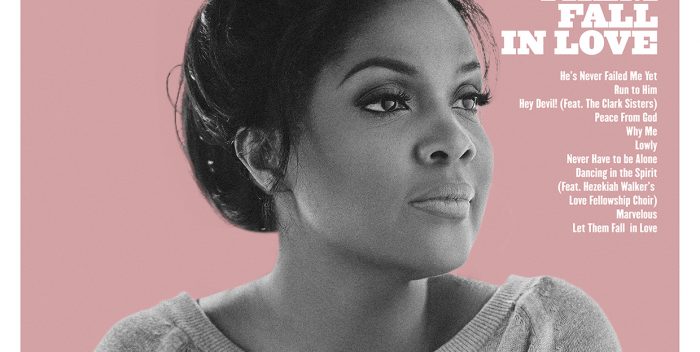 Album: Let Them Fall In Love

From the cover artwork to the music, you will indeed fall in love with Let Them Fall In Love, the latest project from gospel music royalty, CeCe Winans.

With most of the writing and production done by Alvin Love III (CeCe’s son), who also collaborated with longtime Winans producer, the very underrated Tommy Sims, the two created a nostalgic masterpiece from start to finish. The first single Never Have to be Alone is classic CeCe Winans and is swiftly rising up the Billboard charts, while her second single Hey Devil, features fellow Detroit natives, The Clark Sisters. Reminiscent of the 1958 smash, “Splish Splash”, “Hey Devil” rebels against anything that is on radio right now, but in a good way. Songs like Run to Him gives us that Diana Ross and The Supremes effect as Winans sings passionately about running to that living water that we all yearn for. Peace from God and Dancing in the Spirit already solidified this album a classic but Lowly takes it to the next level with amazing instrumentation, melodic background vocals and bible based lyrics courtesy of Matthew 18:3-4.

From the beginning of her solo career, CeCe has always given us soundtracks as opposed to giving us just songs. With “Alabaster Box” she took us at the feet of Jesus with songs like the title track and “It Wasn’t Easy”. With “Throne Room” she took us into the inner court with songs like “Thirst For You” and “Mercy Said No” and how can we forget the gospel version of Brandy’s self titled debut album when CeCe dropped a Holy Ghost bomb with the R&B infused “Everlasting Love”.

Although CeCe gave us nothing short of magic whenever she teamed up with older brother BeBe, CeCe Winans shines brightest when she is “Alone In His Presence”. Not many artists can take us back to the past, yet still keep us in the present. But thanks to her beautiful voice, her anointing and her offspring, CeCe Winans has managed to offer the most defining album of her career.