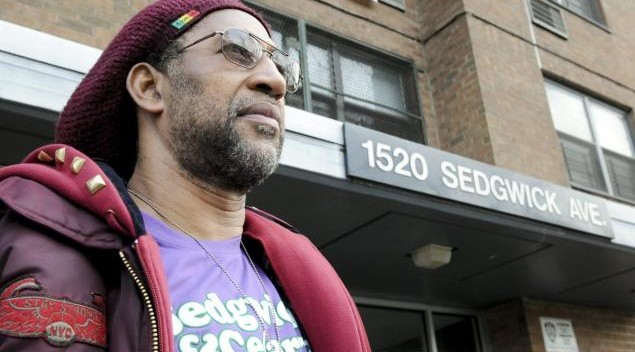 I have to say that I am very happy about this and thought that it should’ve happened sooner. I was born and raised on Sedgwick Avenue, just a few feet from where Hip Hop started and I am very proud of that. My mom, Chery Moore, was a Hip Hop party promoter in the Bronx, so Hip Hop was and is still a big part of my life.

Hip Hop Pioneer DJ Kool Herc stands in front of 1520 Sedgwick Ave. in the Bronx, a building known as “The Birthplace of Hip Hop.” The “Boogie Down Bronx” now has a “Hip Hop Boulevard.”

Mayor de Blasio signed a bill into law that will rename a plethora of streets in all five boroughs of NYC, inclusive of Sedgwick Avenue in the Bronx where hip hop was born.

With the stroke of a pen, de Blasio christened the block “Hip Hop Boulevard” in honor of the Aug. 11, 1973, party where DJ Kool Herc invented hip hop at 1520 Sedgwick Avenue.

“If you have friends on the west coast, remember to tell them it all started here, okay?” de Blasio said before signing the bill.

Mayor de Blasio passed a law renaming streets in honor of the birthplace of hip hop, fallen Detective Randolph Holder and Police Officers Kenneth Anthony Nugent and Kevin Joseph Gillespie
DJ Kool Herc, his sister Carol “First Lady of Hip Hop” Campbell — the host of the “back to school” jam where it all went down — and legendary DJ Afrika Bambaataa all attended the bill signing.

Part of Clinton Avenue in Brooklyn will be renamed after former aide to Gov. Cuomo Carey Gabay, who was gunned down right before the West Indian Day Parade last year.