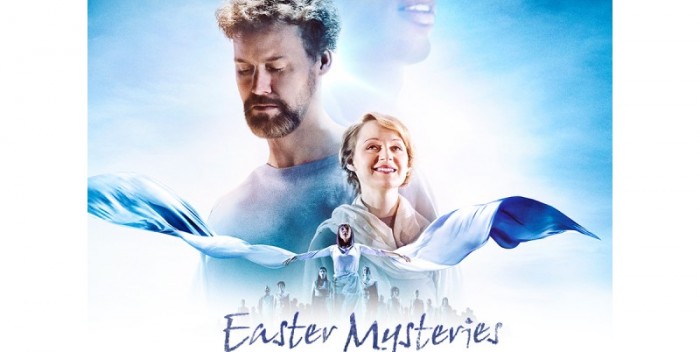 Learn About the Mystery That Shaped History This March with ‘Easter Mysteries’ in Select U.S. Cinemas

DENVER – March 15, 2016 – From the producers who brought you the Tony-Award® winning Broadway hit “A Gentleman’s Guide to Love & Murder,” comes “Easter Mysteries,” an original, and wholly entertaining musical theater depiction of the Easter story for modern audiences. Presented by Fathom Events and SimonSays Entertainment, “Easter Mysteries” will play in select U.S. cinemas for one night on Tuesday, March 22 at 7 p.m. local time, and features veteran Broadway actors and singers from the stages of “Les Misérables,” “Mary Poppins,” “The Phantom of the Opera” and more. In addition to the feature content, a timely interfaith discussion between Christian, Jewish and Muslim leaders on the essence and power of Passion plays will complete the event.

Tickets for “Easter Mysteries” can be purchased by visiting www.FathomEvents.com or at participating theater box offices. Fans throughout the U.S. will be able to enjoy the event in nearly 300 movie theaters through Fathom’s Digital Broadcast Network. For a complete list of theater locations visit the Fathom Events website (theaters and participants are subject to change).

Broadway veteran actor Phillip Boykin, who plays Caiaphas, is enthusiastic about the production. “This is a Passion play like no other. The love bursts forth and the music soars. First there was ‘Godspell,’ then there was ‘Jesus Christ Superstar,’ then there was ‘Joseph,’ and now there’s ‘Easter Mysteries,’ and it’s at the top of my list!'”

“Easter Mysteries,” directed by Danny Goldstein, was staged and captured before a live audience. This first-rate production offers audiences the chance to see, feel and hear real peoples’ experience of this touchstone story of Western civilization in a fresh and moving way.

The music, libretto and lyrics are by Tony Award-winning Broadway producer John O’Boyle with musical arrangements and music direction by Milton Granger.

“Seeing this thought-provoking musical in cinemas is the perfect way to celebrate Easter with family and friends,” said Fathom Events VP of Programming Kymberli Frueh. “With a highly acclaimed cast and crew, ‘Easter Mysteries’ is sure be both an uplifting and entertaining experience.”

SimonSays Entertainment’s CEO Ron Simons commented, “We’re particularly proud to be presenting this beautifully composed work featuring, and created for, audiences of all beliefs, races and genders. Because such a diverse mix of people fill our outstanding cast this production fits squarely within SimonSays’ mission to Tell Every Story®.”

About Fathom Events
Fathom Events is the event cinema distribution arm of AMC Entertainment Inc. (NYSE: AMC), Cinemark Holdings, Inc. (NYSE: CNK) and Regal Entertainment Group (NYSE: RGC) (known collectively as AC JV, LLC), the three largest movie theater circuits in the U.S., and is recognized as the leading distributor of alternative content. It offers a variety of one-of-a-kind entertainment events in movie theaters nationwide that include live, high-definition performances of the Metropolitan Opera, dance and theatre productions such as the Bolshoi Ballet and National Theatre Live’s Hamlet, sporting events like FS1 Presents USA v Mexico, concerts with Roger Waters and One Direction, the TCM Presents classic film series and faith-based events such as The Drop Box and Four Blood Moons. Fathom Events also takes audiences behind the scenes and offers unique extras including audience Q&As, backstage footage and interviews with cast and crew, creating the ultimate VIP experience. In addition, Fathom Events’ live digital broadcast network (“DBN”) is the largest cinema broadcast network in North America, bringing live and pre-recorded events to 875 locations in 179 Designated Market Areas® (including all of the top 50). For more information, visit www.fathomevents.com.