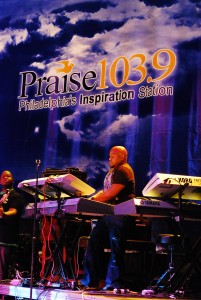 Saints from the Tri-State area (Philly, New Jersey, Delaware) and even some New Yorkers brought the house down last evening at the Susquehanna Bank Center (formerly Tweeter Center) as Darius Brooks, James Fortune, Brian Courtney Wilson, Vickie Winans, Dewayne Woods, Tye Tribbett, Smokie Norful, Marvin Sapp and Donald Lawrence & Company took to the stage and wowed the sold out crowd! The event was hosted by a very jovial Marcus D. Wiley of the Yolanda Adams Morning Show as he went in and out of his popular character “Bishop Secular”. Coming in at a close second in the comedy arena was the “Hardest Working Woman” in show business, Miss Vickie Winans! From the moment that she stepped on the stage she was hilarious and kept the crowd in stitches. However, once she opened her mouth to sing the Hip-Hop infused “Shake Yourself Loose”, you began to realize the real reason she came to Camden, NJ. James Fortune & FIYA hit the stage and immediately went into songs from their new album “Encore”. “You Are Here” got the crowd on their feet and they stayed there as James ministered like only he can. Surprisingly, they did not perform the song that brought them international success- “I’ll Trust You” but with hits like “The Blood” and “Encore”, the crowd was still satisfied.  If there was a gospel version of Brian McKnight, then newcomer Brian Courtney Wilson is it! Wilson began his set with the title track “Just Love” and it was a great introduction to his, not one, but two hits on heavy rotation at Praise- “All I Need” and “Already Here”. There were actually women in the audience screaming as if Brian McKnight was on the stage. Brian Courtney Wilson’s voice is smooth like butter and by the time his set was over he had the crowd chanting “HALLEEEEELUUUUJJJJAAAHHHH” minutes after he left the stage.  According to his Twitter account, it took Dewayne Woods about eight hours just to get from Atlanta to Philadelphia due to severe weather conditions and issues with three different planes but he made it to the stage and “Let Go and Let God’! Hometown favorite Tye Tribbett was next to hit the stage and it was evident that he was in his hometown as the crowd went WILD when Tye and his new group hit the stage. I must say that it was a little different not seeing G.A. up on stage with him, however, they still did not disappoint; opening up their set with a new song from their upcoming album arriving in September. Tribbett’s energy was insurmountable as he breezed through songs from his previous albums, “Life”, “Victory Live” and “Stand Out”. The crowd was so hyped that they called for an “Encore”, not a James Fortune “Encore” but a Tye Tribbett “Encore”! Although Tye Tribbett was the hometown hero, he was not the headlining act as there were still three more acts to go. Smokie Norful kept the crowd going with his medley of hits including, “Justified” and “I Need You Now” and chart topper Marvin Sapp entered the stage and did songs from his new album, “Here I Am”, which hits stores on Tuesday, March 16, 2010. Sapp continued to take the sold out crowd on a spiritual roller coaster as he did his hit songs “Praise Him In Advance”, “Best In Me” and the million seller, “Never Would Have Made It”. In between each act the crowd was introduced to some of their favorite radio personalities like Cee Cee McGhee, Big City, Dezzie and others. Alas, the Man of the hour graced the stage to an outpour of screams and cheers. Donald Lawrence and Company was not only the last act…they were a CLASS ACT simply clad in burgundy silk outfits with their leader sharp as always. They started off their set with “The Blessing of Abraham” and at 11:ooPM, the whole auditorium was ready to get their inheritance. Kim McFarland sang “Encourage Yourself” like it was her last time and “King In You” brought many to tears as many people ran through the aisles and rejoiced! The night ended with “Let the Word Do The Work” as the group, Donald and rapper Brother Hahz brought it on home. Big Boss, Elroy Smith at Praise 103.9 sure knows how to put on a show!!