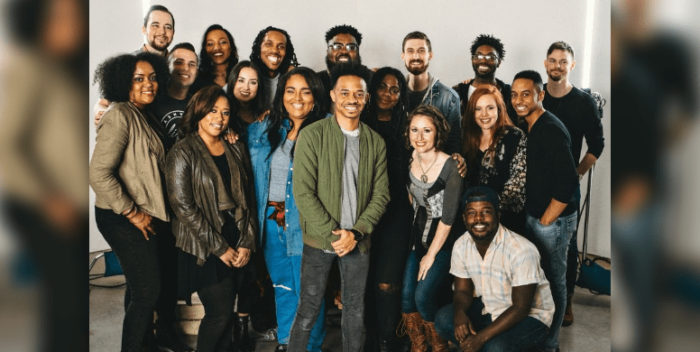 Nashville Life Music was birthed out of Nashville Life Church, founded by 12 time Grammy® winning artist, CeCe Winans and her husband Alvin Love. The group’s music is distinctly happy, and uplifting, as proven by their Top Ten 2019 single, My God featuring Mr. Talk Box. The aggregation’s upcoming full length album, Here For Jesus, is due this summer and the lead single, Sing a Song, is another one of those feel good songs.

We got a chance to catch up with the group’s leaders, Alvin Love III and Dwan Hill, as we discussed how Nashville Life Music got started, their love for their church, COVID-19 and their latest music video for Sing a Song.

Root: Before we get started, Alvin, I want to congratulate you on a job well done on your mom’s (CeCe Winans) album, Let Them Fall In Love. That project is simply a masterpiece.

Alvin Love: I really appreciate that. Thank you.

Root: I loved the whole vintage vibe of that album and the way you approached it from a production standpoint. Although she has always been innovative and done things out the box, it was a very timely, yet unorthodox record.

Alvin Love: It was so cool and a huge honor. I actually listened to it for the first time in a long time a few days ago, considering all of the extra time on our hands. Doing that record was a lot of fun and I’m still grateful for the opportunity.

Root: Last year, your song My God (featuring Mr. Talk Box) was such a dope song and it really introduced Nashville Life to the masses. Talk about how Nashville Life got started.

Alvin Love: Nashville Life Music is a byproduct of Nashville Life Church. We started off as a community that met on Tuesday nights. It was about 30 or 40 of us and it was a simple time of prayer where we would have fellowship and have pizza and that’s basically how the church started. Dwan would be on the piano leading us all in worship and as we started to transition from Tuesday night prayer and morphed more into a church, we started to form teams and that’s when the worship team started. From there, it wasn’t long before the worship team started writing their own songs. It was a natural progression considering there are a lot of musicians and songwriters in Nashville. We then ran into an issue where people wanted to hear our songs outside of the worship services, but we didn’t have anything for them to listen to, so we started recording and we did the songs Shine on Us and My God soon after. Nashville Life went from being a worship team to now releasing our second album on Integrity Music.

Root: When you think of choirs, one tends to think of an aggregation of people with robes, suits and dresses, singing and wailing.What makes Nashville Life different from your average choir?

Dwan Hill: We have a pretty diverse congregation. Thanks be unto God because that definitely is something that he did for us. I grew up singing in choirs and being around gospel music, so I’m very familiar with that. On the other hand, there are other groups of people at Nashville Life who did not grow up listening to choirs. Some grew up on CCM music or no Christian music at all. Ultimately, our sound reflects the congregation and we’re kind of a choir by default because we have a lot of great singers who sing at the same time. We don’t have a choir necessarily organized at the  church, but when we sing at a service on Sunday or at a prayer night, we sound like a choir because we have so many great singers. So, I think the sound has just kind of developed and morphed into something special because the congregation is a special group of diverse people.

Root: It is not too common for a choir or worship team to record their very own projects. Are they excited?

Dwan Hill: Yes they are. Some of them are actually artists, worship leaders and have their own music out. For the most part, I think a lot of them see it as an opportunity not just to be involved in their own individual lives and careers, but to really launch something that’s bigger than all of us. I don’t think any of us individually, has had the same platform that we have collectively. So it’s been really fun to do this with our friends and family.

Root: Alvin, you come from a very musical family who are not only great singers but songwriters as well. Do you write most of the songs for Nashville Life or is it a collaborative effort?

Alvin Love: I’ve written a good amount, but I don’t write most of the songs. Dwan actually writes a lot of the songs. He’s the worship pastor at the church, so a lot of music predominantly comes from him. I co-write a good bit and then we’ve got some other songwriters in the church too.

Alvin Love: That’s actually a huge compliment. I’m definitely up on The Partridge Family because I used to watch the reruns on television. I think there’s some common ground between what we do… I mean they were a band and a family just like us. We promote joy, we promote hope and we promote family. So I think there’s definitely some similarities there.

Root: Your current single, Sing a Song, is one of those happy songs that anyone can sing along to. The music video for the song is pretty dope and has a nice retro look to it. Talk to us about how you guys came up with the concept for the video.

Alvin Love: Like you said the song definitely has a retro feel to it, which not only inspired Sing a Song, but inspired direction for the entire album and we wanted to stay consistent with that theme sonically and instrumentation wise. From there that lead to the album art, which was like a seventies inspired concept. We then had the idea to go to an old high school gym to not only do a photo shoot, but shoot the music video as well. We got a crowd and we did like a basketball/pep rally theme, so we were able to “kill two birds with one stone”.

Root: We are currently in the middle of a worldwide pandemic with this COVOD-19 crisis. Before this, the city of Nashville was hit hard with a tornado where many lives were lost and the city is trying to rebuild. What do you say to people who are feeling discouraged during this trying time?

Dwan Hill: We’ve been on a series at church actually and I believe our pastors heard from God, as they’ve been talking about how much God loves us in a series entitled: The Greatest Love.I think it’s really important to remember during a challenging time like this, that our foundation is the love of God. The word says faith, hope and love abide forever, but the greatest of these is love. Love is the most powerful and long lasting characteristic of God and what’s been sustaining me is the fact that God not only loves me, but he knows me and he’s going to take care of me and supply all of my needs. Although I’m in the situation that I don’t know how it’s going to turn out, I do know that the ultimate result will be God’s glory and my good.  God is going to get the glory out of this somehow and he is gonna turn it for my good. So I would just say to encourage everybody that if you don’t know the love of Jesus, if you don’t know what he’s done for you already, then definitely ask him to reveal that to you. Talk to somebody at church, call a pastor, call a friend and really get an understanding of the love of God. If you already know and have experienced God’s love, just lift up thanksgiving and gratitude for what you already have and let that gratitude be the motivation to keep going and not settle here, but just believe that we have so many more things to look forward to.

Root: What does your church, Nashville Life, mean to you?

Alvin Love: That’s a great question. Nashville Life means everything to me. It was sort of an extension of me coming to Jesus. I don’t think I knew much of life as far as living committed to Jesus as a grown man before Nashville Life. So, it has been that space for me to grow as a Christian. It’s been the first time that I can truly say that I was in a spiritual community in the way that you see Jesus in the Bible. For me it’s more than just a church where I work and sing at, it is literally my family. My parents are the pastors of the church but my best friends are also members and they’ve become brothers and sisters to me. Nashville Life is a safe haven. It’s a place of healing and we’ve had a lot of broken people come into our church and I’m proud to say that many of them are making their own disciples, winning people to Jesus and preaching the word every week. So, it’s been a game changer for me. It’s been proof that God is real and that the church is alive and that the word of God is true.

Root: Dwan, same question for you. What does Nashville Life mean to you?

Dwan Hill: Nashville Life is a very big part of my life. I met my wife, Laura, there and we got married at the church. Pastor Alvin and Pastor CeCe married. Pastor CeCe sang at our wedding and both of my kids have been dedicated at Nashville Life. I agree with Alvin, it’s much more than a place I go to on Sunday, it’s family. My life has been drastically improved because of this church. There are a lot of temptations for people not to be invested in the church right now and there’s a lot  of rationale that could say that it’s either old fashioned, tainted or contaminated in some way, but I would say the opposite. The most blessings that I’ve received have come through what God has done at Nashville Life. I think that’s true for any church that is committed to the Lord, I don’t think it’s special just ours, but in my experience, Nashville Life has been such a blessing and I’m very grateful for it.