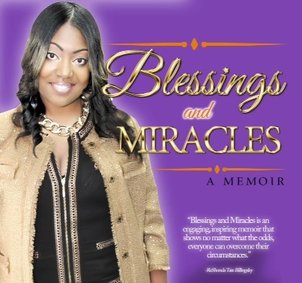 A Memoir of a Teen Mom Turned Millionaire

“From a young age, no matter what I started, I tried hard to complete it.  Especially if someone tried to tell me that I couldn’t do something, I would work very hard to prove them wrong.  I was just determined to get it and I believed with all my heart that having this license was what God wanted me to do, so that’s why I never gave up.” –Shashicka Tyre-Hill

Brunswick, GA (May 2013)– Success can have many definitions, but ask the people who have obtained it and they will say, “I never gave up.” In BLESSINGS & MIRACLES (June 2013; ISBN: 978-0-9893682-0-9; $15.00) a memoir Shashicka Tyre-Hill shares how life didn’t begin in the best of circumstances.  At the tender age of four she witnessed her mother and father arguing over him wanting to take food from the family refrigerator and sell it to feed his drug habit. Shashicka’s emotional outburst in response to her parent’s quarrelling landed the young girl in the Savannah Regional a mental facility. This was the moment that forced her parent’s separation. Things got must worst before they got better. After becoming pregnant at the age of fourteen, there were not many who would have given Shashicka much of a chance in life, but that was not the way Shashicka saw it.  From the time she was young, she knew God had a greater purpose and with determination and dedication, she worked hard to find what God had for her.

Although the road was filled with bumps, including sexual advances from her mom’s boyfriend, to almost losing her child to the system and landing on public assistance to survive as a teen mom, Shashicka finally found her passion—caring for the sick and shut-in.

BLESSINGS & MIRACLES is a moving memoir that will have readers cheering for a young Shashicka as if they knew her. And upon finishing the story, readers will come to realize they do know her. She is the young girl standing at the bus stop, the young boy getting into mischief on the street corner, the kids loitering in the park or cutting class at school. Shashicka represents the battle and triumph of so many children of color who find themselves being raised in single parent homes, forced to grow up too fast, too soon.

“When I was fifteen, and I had my baby and my mother told me to leave her house I believe God had abandoned me.  As I was walking in the streets, I was thinking that no one cared about me; I didn’t really have anywhere to go.  I cried out to God asking Him why?  Why would he do this to me?  Why did it have to happen to me?  I felt totally alone and I thought that God had forgotten about me — but just for a moment.  I had a couple more moments of, “Why me, God!” like when I almost lost my daughter.  I really questioned God a lot then, especially while I was locked up.  I didn’t understand why when I was doing everything right, when I was working so hard, why I had to go through all of this.  But though I questioned God, He was always there.”

Fortunately for her, the opposition allowed her to find passion early in life. A light touch from a caring person can leave a lasting impression and after caring for her ailing grandmother, Shashicka turned her compassion for the sick and shut-in into a career that has not only given her a wonderful life, but has helped others to thrive.

Shashicka’s accounts of her early years force readers to think about the obstacles before them and re-adjust before throwing in the towel. Through her life readers will come to see that the problems we face are often the mental and emotional workout needed to strengthen us for the journey to destiny. Readers will find inspiration as they witness a young girl’s enduring will to succeed, the daunting pursuit to find lasting love and the quest for entrepreneurship. “When I look back over my life today, I see that there were plenty of times I had to stretch my faith, but the major time for me was when I just couldn’t get my license.  Having to do that three times was a lot.  And the lady who was responsible for giving me the license spoke such negativity into my life.  I remember crying so hard, that I couldn’t even speak.  Then, I talked to my mom and she helped me to stretch my faith.  That was when I went back for the third time.  And, I did it!”

At the age of 21, Shashicka was a married mother of two who had become the youngest person in the country to obtain a home health care license. She started her first business Miracle Home Care Inc. in Brunswick, GA. Today she has seven locations in the state of Georgia.  BLESSINGS & MIRACLES offers a uniquely personal, deeply intimate look into the complicated past of a teen mom and her will to succeed.

Each chapter of this memoir carries the reader from tragedy to triumph, as this young girl grows into a woman—a successful, business woman, despite numerous setbacks. Please consider BLESSINGS & MIRACLES for review and/or feature this upcoming summer.