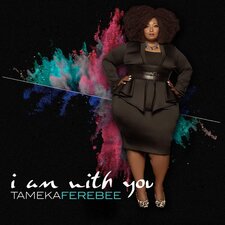 PHILADELPHIA’S OWN – SINGER, SONGWRITER AND MUSICIAN TAMEKA FEREBEE RELEASES BRAND NEW SINGLE “I AM WITH YOU”

THE FOLLOW UP TO HER SMASH HIT “LIVE FOR GOD,” “I AM WITH YOU IS AVAILBALE TODAY ON ALL DIGITAL OUTLETS

PHILADELPHIA, PA (FEBRUARY 26, 2021) – Tameka Ferebee is one of the most sought after musicians in the City of Brotherly Love, Philadelphia. Tameka and her sisters, The Ferebee Sisters, are often referred to as “The Clark Sisters of Philadelphia” due to their singing style, flair and musicianship. In 2016, Ferebee released her debut EP entitled: He Can Do It All, which was produced by Grammy® winning producer Vidal Davis (Michael Jackson, Mary J. Blige, Usher, Jill Scott). Now she is back with a beautifully written and masterfully interpreted new single entitled I Am With You, produced by Brandon Young & Franklin “Bubby” Fann. Download here: https://music.apple.com/us/album/i-am-with-you-single/1553553963

The single released today, February 26, is a very personal song for Tameka, as she wrote the song from a place of her being a singe mother and God still being with her every step of the way. I Am With You is not just a song but a declaration from God to his people, no matter what the situation. The song is already one of the most talked about songs throughout a plethora of virtual showcases and is going for adds on radio stations across the country.

To show Tameka that YOU ARE WITH HER, all you have to do is:

Get Social with Tameka

Mother, Recording Artist, Songwriter, Organist/Keyboardist, Producer and Music Instructor, Tameka Ferebee is indeed a major force in the Philadelphia music scene. She is a graduate of Creative and Performing Arts High School and studied Classical and Jazz Voice at Community College of Philadelphia. As the newly appointed chapter representative for the Philadelphia Chapter of the GMWA, for the past 10 years she has also served as the Minister of Music at Church of the Redeemer in Philadelphia. As Founder and CEO of Tameka Ferebee Productions, Tameka is passionate about pushing and promoting gospel artists and musicians from the Philadelphia area. In 2012,  under her PHILLYBABY brand, Tameka created the Philly Flip It Concert Series, a specialty show created to celebrate mainstream artists, honor local legends and present new artists, in an effort to show unity within the Philadelphia gospel community.