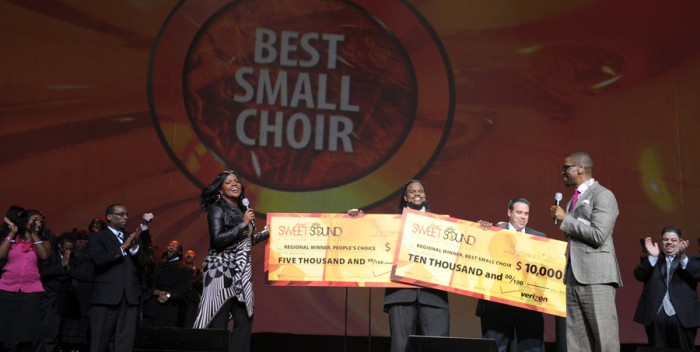 For the third year in a row, Verizon’s presents “How Sweet The Sound”, a gospel church choir competition in search for the Best Church Choir in America! All tickets are sold for the low price of $5 and $7 and the city of “Brotherly Love” represented in a major way, selling out the Wells Fargo Center to a crowd of over 20,000. The evening started with a tribute of sorts to the late Walter Hawkins as the How Sweet The Sound Choir did a medley of Hawkins songs such as: “Be Grateful” and “Don’t Wait Til The Battle Is Over”. Hosted by Donald Lawrence and the beautiful CeCe Winans, How Sweet The Sound is nothing short of spectacular, with its mainstream set and top notch production. “It is great that a secular entity such as Verizon saw fit to put so much time and money into gospel music in such a classy way”, stated Bishop Hezekiah Walker, one-third of the judges who hosted the event in Philadelphia, along with Award Winning Radio Show Host/Vocalist, Lonnie Hunter and Gospel Superstar, Marvin Sapp.

Grace and Truth Delegation started off the night in the Small Choir segment of the show with their rendition of “Didn’t My Lord Deliver Daniel”. Meanwhile the All About Christ Choir rendered a very unique version of “His Eye Is On The Sparrow”. The choir was good and the vocals were tight but they were a bit overshadowed by a tall gentleman in a mint green suit and top hat standing to the left of the choir. Host, Donald Lawrence was so beside himself that he had to ask if the man was a bodyguard for the choir. The man was not only the father of the woman director, but the Pastor of the church. A jovial Marvin Sapp even joked that he was a bit nervous that the man might pull out a gun. Needless to say, this was one of the comical highlights of the evening that unfortunately overshadowed the choir’s performance.

Up next, the Ambassador Seed of Love Church Choir took it up a notch performing the Kurt Carr penned, “For Every Mountain”. The song made famous by Yvette Williams of the Kurt Carr Singers, was delivered by a male lead, who started off mediocre but ended with a bang! Clad in classic black and white outfits, the Sounds of Life Choir was bold enough to do one of host, Donald Lawrence’s most popular songs, Prayer of Jabez (Bless Me) and they did not disappoint. Their showmanship was impeccable and their vocals were impressive. It was evident that not only did they come to win but they came to have church!

A few moments later, the stage was dark and seconds after that the words, “He saw the best in me when everyone else around could only see the worst in me” blared through the speakers. Just one day after burying his wife MaLinda Prince Sapp, HSTS judge, Marvin Sapp, delivered the most heart wrenching and sincere medley of his two hit songs,“The Best In Me” and “Never Would Have Made It”. Many people in the audience were crying and praising God as Donald Lawrence admonished the crowd “not to look at a bad situation with your natural eye but with spiritual eyes”. After a brief intermission, Co-Host and 11 Time Grammy Winner, CeCe Winans, sang a medley of her songs “Pray”, “Hallelujah” and new single, “I Need More”.

Starting things off for the large choir category was the Kingdom Worship Center Congregational Choir who sang the traditional church anthem, “Holy, Holy, Holy” with power and conviction and ironically have only been singing together as a choir for one year. Up next was fan favorites (who many thought should have won in 2008), United Voices of Ford Memorial. Ford Memorial sounded great and looked just as great as they sounded. While the women wore purple and gray dresses, the gentlemen wore classic black tuxedos…. pure elegance! After selections from Abundant Life Fellowship Worship Choir and the Voices of the Lord, respectively, it was almost time to crown a winner. Brooklyn native and 2 Time Grammy Winner, Hezekiah Walker and the Love Fellowship Choir sang their hit praise and worship song, “You’re All I Need”.

After a wonderful night of praise and worship from the greatest church choirs in the Tri-State area, it was time to announce the winners. All attendees of the show were asked to text their choice to 47100 and the winner would be chosen. Mario Turco (President of Northeast Area, Verizon) and hosts, Donald Lawrence and CeCe Winans presented the winners with their checks and it was no surprise that the winner of the Small Choir segment was indeed the “Sounds of Life” , who received $5,000 for their victory but in a strange twist of fate, they were also awarded an additional $10,000 for the V-Cast People’s Choice Award. Meanwhile, the United Voices of Ford Memorial won for Large Choir and was also awarded $10,000. So, who won for the Best Overall Choir? You guessed it… Sounds of Life! Let’s see if they will be crowned the Best Church Choir in America. For updates on How Sweet The Sound, follow @bestchurchchoir on Twitter.com