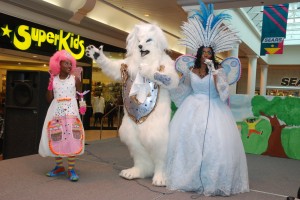 She is not only an advocate for child abuse; she is a survivor! How does one woman survive getting raped by her brother in law and deal with the guilt and shame of her past?

Kimberly Rhem is a true soldier and she transformed her world of low self- esteem into the Fabulous Magical Kingdom- a real LIVE show with characters that can identify with the hurt and pain of abuse.  Are you paying attention to your children? Could it be that they are being sexually abused and you don’t even know it? Anyone who has children, nieces or nephews, should definitely continue reading.

Root Mag: First, I would like to thank you for taking the time to tell your story. Oftentimes abuse, and definitely physical abuse is kind of taboo in the African American community. Can you to tell us about how you were abused as a child?

Kimberly Rhem: My abuse started when I was 11 years old. I was sexually abused by my sister’s husband about a week after they were married.  Back in those days they didn’t go on honeymoons, so they went back to their place and I went back with them. I’ll never forget my mother had me dressed like a baby doll; I had on a white sweater and my hair was in ponytails. When it was time for me to go, I was crying because I wanted to be with my older sister and she pleaded with my mother to let me come back. So when I went back to the house the next day, my sister’s husband raped me and my sister actually walked in while he was raping me and she walked back out. Once he was finished, I will never forget the blood dripping down my leg. My sister actually helped me get cleaned up because it was time to take me home. I remember her telling me “never tell anyone what happened.”

Years later she had two kids by this same man and he ended up raping his daughter. Her daughter in turn ended up molesting my son. She ends up having a child of her own and then her daughter, who was two years old at the time, ends up being raped by a man and she ended up dying because of it. So the pattern was a snowball effect that kept going on and on. I don’t in any way blame myself for what happened but I keep thinking to myself that if my sister would have stood up and said what happened to me, it could have possibly broken the cycle.

There are so many lies and secrets in black families regarding abuse and I just refuse to keep the cycle going. Even after everything I’ve been through, I never turned to drugs, alcohol or cigarettes because the Lord kept me the entire time. But every time this man came around my family and I, he would always have this frown on his face and I would feel like I was being raped all over again.

My mother found out that I was raped when I was 18 years old and she still let him come around. Both of my sisters knew that I was raped because they read it in my sister’s (who is married to the rapist) diary. So they all knew about it, but I was the one that was holding on to it. For the longest time, my mother’s name for me was “The devil’s child,” so I believed I was the devil’s child until one day the Lord sent a soldier to me and she kept asking me everyday to go the church with her. After much contemplating, I finally decided to go to church and I joined church that same day but once I got involved in the church, the pastor of the church violated me. I still stayed there because I loved the women of the church and I didn’t want to go because it was the first time I felt like I had family. I felt close to them and I didn’t want to leave, but the Lord was telling me the whole time to leave. My husband ended up leaving the church, but I didn’t leave; I kept going. He didn’t understand that I wanted to feel that love that I didn’t receive from my family growing up. Then the Lord eventually removed me from there. Once he removed me from there, He [the Lord] stated to me, “Kim, in order for me to give you your purpose and go on with your life, you have to forgive your rapist, your mother, your sister and everyone who has hurt you.” At that time I didn’t even believe in God like I do now but I kept feeling his presence.

I eventually gave my life to Christ and once I did that, He gave me my purpose. I’ve been moving in my purpose and bringing awareness to child abuse since 2007.

Root Mag: Wow. That’s very intense, and like you said, it’s a cycle.  From the very beginning, why do you think your sister just turned away? Do you think it was something deeper? Did she know that he was this type of person? Have you and you sister had a conversation since then?

Kimberly Rhem: No. My sister and I have never talked about it and my family is not happy at all that I am putting the situation out there. Now I did talk to my niece that was raped by him, because I wasn’t talking to her either because of what she had did to my son, but she saw me on Facebook and she wanted me to tell the story. She said she was tired of the lies and secrets also; but as far as my sister, absolutely not. I cannot go and talk to her because it would be, “I don’t give a “F”, kiss my so and so, and all this mess and knowing it would make me feel like I was being raped all over again. So I don’t do that, I just decided that I would just leave it in God’s hands. I have my purpose, and I’m much stronger, it doesn’t affect me the way it used to affect me.

Root Mag: Is your sister still married to this guy?

Kimberly Rhem: No. After all this stuff happened, then she finally ends up leaving him.

Root Mag: Wow. So fast forward, you finally start the fabulous magical kingdom, what prompted you to start this? Was it a struggle in the beginning? Did you do this after you got saved?

Root Mag: Can you elaborate on the characters? Is it puppet characters just so our reader would know exactly what you mean as far as characters?

Kimberly Rhem: My characters are not puppet characters; they are like any other characters you would see at Disney World.  I play the character Queen Anastasia and I wear a huge ball gown and a unique crown on my head. My husband plays a character by the name of White Wolf and then we have Sissy and Millie, as some of the characters are based after some of my family members and they don’t even know. Sissy has downs syndrome, and Millie owns the magical kingdom.

Root Mag: So basically this is a skit that you go to schools and churches and things of that nature?

Kimberly Rhem: Well actually, my characters are not allowed in church. The Lord will not allow me to bring my characters in church and the reason why is because He doesn’t want people to think that the Fabulous Magical Kingdom characters are Baptist, or Christian, or have any type of religion. My characters don’t know anything about religion, color, special needs, or being handicapped because we wants all children to be welcomed inside the Fabulous Magical Kingdom. But we will take them into schools and different events for children.

Kimberly Rhem: You can always tell when a child has been bullied or abused because their behavior changes. You have to take the time to know your child. My child was two years old when he told me what my niece had done to him. Children are very intelligent and we need to give them more credit than what you give them. If you start talking to them early about the right touch and the wrong touch or if a teacher calls you and tells you that your child is acting out, there is a reason why.  They’re so quick to put them on medication, but there is a reason. Start paying attention to the signs. Sixty-Eight percent of children, who are sexually abused, are abused by someone in their family or by someone they know. It is the parent’s responsibility to make sure that their child is comfortable enough to tell them even if their perpetrator threatens them.

Root Mag: Amen. So how can our readers get in contact with you for workshops and things of that nature?

Kimberly Rhem: Yes, they can go to my Facebook page, type in Kimberly Rhem and ask for a friend request. They can also go to my website which is http://www.thefabulousmagicalkingdom.webs.com/

Root Mag: Well I thank you for your time and for sharing your story. I’m sure your story will help someone.

Kimberly Rhem: I appreciate you for having me; it’s been an honor. 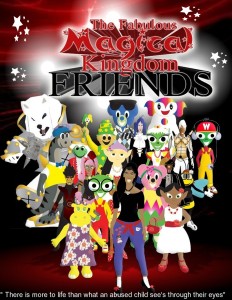