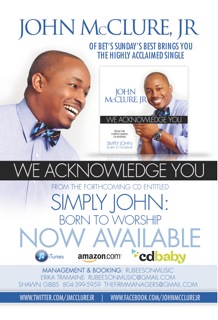 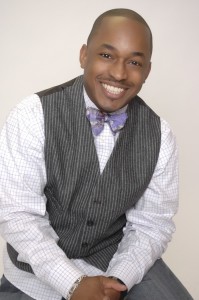 Out of all four seasons of Sunday Best, Season 2 seems to be the most memorable and the talent from that season appears to be the most consistent and relevant. In Season 2 alone, all of the top 5 contestants have become household names in the gospel music industry. Y’Anna Crawley’s debut, “The Promise”, reached No. 2 on the Billboard Gospel Charts, runner- up, Jessica Reedy, reached No. 1 with her debut album “From The Heart”. Just last week, third runner up, Latice Crawford, signed with Verity Records and will begin working on her debut, Dontavies Boatright has been touring places like Italy and South Africa and Zebulon Ellis is signed to Flow Records and has released two moderately successful singles to date.

Up next is John McClure, Jr.  After several years of  touring around the world with Jonathan Nelson and Purpose, as well as acting in several stage plays, John is ready to grace the world with the voice that BeBe Winans was a huge fan of while John was a contestant on Sunday Best. This week, John McClure, Jr. has released his first single “We Acknowledge You”, from his highly anticipated, soon to be released debut “Simply John: Born To Worship. Make sure you purchase the single at ITunes, Amazon or CD Baby Today! 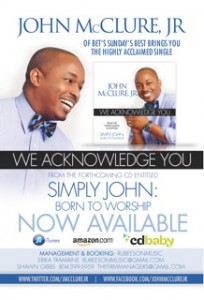 John McClure Jr. is a worshipper without compromise.  Perhaps one of the most timeless voices to ever emerge, with a balladry style that exudes excellence, sincerity, and most importantly, a heart and love for God.   These virtues have helped catapult him onto a national platform recently, landing a spot as a top five finalist on BET’s “Sunday Best” Season Two.   Having ministered in song with such musical greats as Donald Lawrence, Karen Clark Sheard, and Jonathon Nelson, John Jr.’s musical ingenuity and passion for God will captivate audiences for years to come.  John has released his single “We Acknowledge You” and is currently working on his first CD, entitled “Simply John:  Born to Worship”.

He and his wife Erika live in Maryland where he currently serves as minister of music at Kingdom Worship Center under Bishop Ralph and Lady Deborah Dennis.