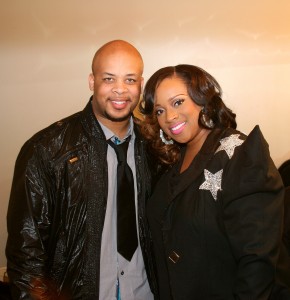 On a chilly winter night in Chicago, the cold weather didn’t stop people from lining up outside in droves for gospel singer Kierra Sheard’s first live recording, featuring her Detroit-based choir, Bold Right Life. Fans wrapped around the corner of the Harold Washington Cultural Center on Monday Feb. 28, 2011 with eager anticipation. As expected, the Detroit native delivered a power-packed performance with the BRL choir backing her, leaving fans in awe. The album entitled “Free” produced by younger brother and album producer, J. Drew Sheard II, is sure to be a hit with fans of Kierra, who love her urban contemporary sound. The free concert, presented by Karew Records started by Sheard’s parents Karen Clark and J. Drew Sheard Sr., definitely made a lasting impression on concert-goers who raved about it on their Twitter and Facebook pages.

Before Sheard hit the stage, gospel artist and producer Donald Lawrence invited the crowd to stand and welcome the young singer, who gave an energetic performance to a jam packed house. The show began with the song “War” a battle chant song that sprung the crowd to their feet, with Michael Jackson Thriller-like dance choreography, declaring victory belongs to our mighty God. The high-energy performance continued on with a colorful tune that echoed “You Are” which ended in an uproar when people everywhere broke out shouting and giving God the praise. Sheard’s stunning vocals captivated the audience as she effortlessly sang ballads like “Indescribable” and another song which contained lyrics like “I am free/mentally,” sending the crowd into worship. There were other songs that moved the crowd like the jazzy rhythm and blues tune “Victory”, featuring gospel artist James Fortune. The night ended with the hip hop influenced track “People”, leaving fans yearning for more.

“We’re not just singers, we’re servants of God’s people and ministry is meeting the needs of the people. The only way to understand that is to get in the word and see how Christ talks about having humility similar to a child and the word helps us,” Sheard said.

While Christ is definitely reflected in Sheard’s life, she hopes to continue her family legacy by spreading the gospel message in her music for years to come. Sheard’s family was right by her side to share the special night, including her parents Bishop J. Drew and Karen Clark-Sheard. Her mother, Karen Clark Sheard of the legendary gospel group The Clark Sisters was proud, to say the least, of her daughter’s musical talent.

“To see her tonight was absolutely breath taking. God let her walk into her own and not be a replica of me or my sisters. To see her have her own ministry is so amazing and me and her father are just proud parents,” Clark-Sheard said.

Clark-Sheard wasn’t the only one holding back tears during her daughter’s performance, her sister Elbernita “Twinkie” Clark-Terrell was touched as well. “I’m very excited for Kierra! All of her other recordings have been wonderful and I am just so very proud of her,” Clark-Terrell said.

With her family by her side, the 23-year-old singer has a promising future ahead of her. Soon she will be unveiling her own clothing line, called Mamajik and her fiancée, Detroit Pastor Welton Smith IV, will be unveiling Sheard as his bride. “The same sweetheart that people see on stage is the same sweetheart that I’m going to marry in a few months. Tonight is just a glimpse of what God is doing in her life,” Smith said.

The album, “Free” which will be released this summer, denotes the dawning of a new day and new walk with Christ, a journey that Sheard is grateful to be apart of. Backstage surrounded by family and friends, Sheard was grateful for the opportunity to minister to the people and summed the night up in her own words, “Free.”

“I’ve gone through some crazy battles in my mind, the enemy can really use the mind as a battlefield. I’ve asked for God to free my mind and now I’m walking in freedom,” Sheard said. 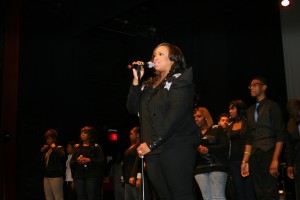