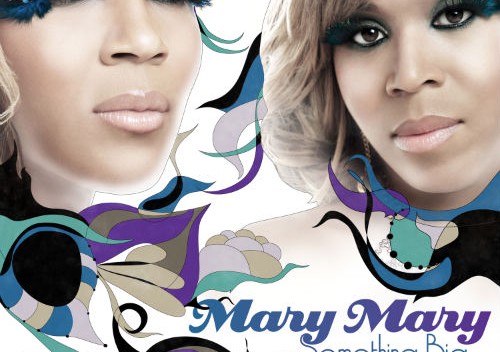 On March 29th Something Big is happening in music! After a two and a half year hiatus from making music, Erica and Tina- better known as the Grammy award winning, platinum selling duo Mary Mary, will be releasing their sixth full length studio album. Something Big is a 12 song set that takes the listener on a holy ghost party from the start with the title track Something Big. The song samples the 1970’s Jackson 5 hit, “Mama’s Pearl” with perfection, and if the song Something Big wasn’t BIG enough, Something Bigger (Track 2) takes it up a notch with the Black Eyed Peas inspired hip hop track that can be included in any club’s playlist across the world. The difference is, the Something Big they are referring to is the Big G O Dizzle (GOD). The Mary’s first single, Walking is already a huge hit at radio and sits handsomely at #16 on Billboard’s Top Hip Hop/R&B songs in the country.

On the house/club mix infused Never Wave My Flag, the ladies sing about how not to surrender to the tactics of the enemy with these powerful lyrics: “Seems like I should run away cause life is hitting me in the face, but I’m here and I’ll never surrender to fear, retreated me, defeated no way cause I can’t. Cause I can see it, I’m getting closer, the heart is brought up and it’s almost over. And now I’m stronger, I’m a fighter and only victory can satisfy this hunger”.

Other stand out tracks include the old school flavored Survive, the acoustic, happy song- Are You Ready (Get Your Mind Right) and one of the best written songs of their 11 year career, Sitting With Me. The aforementioned is a song of redemption for those who may not be apart of the “In” crowd because they love God unapologetically. This song is definitely for the youth of the church who may struggle with their salvation in school and in everyday life, in an effort to be cool.  The chorus of this song grabs you like a thief in the night- “They’ve been left out, looked over just for carrying this cross on your shoulder. It’s OK with me if I’m the last who’s picked for the team. I’ll sit on the sidelines as long as he’s sitting with me”.

For 11 years, Mary Mary has consistently given us great gospel music. Not only have they given us contemporary classics like Shackles and God In Me, they have also given us heartfelt music like Yesterday and I Worship You. They always find ways to re-invent themselves without straying too far away from that sound we have all grown to love. Mary Mary have created a lane that no one can come close to, much less try. Has there been another female duo to hit the scene in 11 years? With that said, Warryn Campbell and the Mary’s have done it again. Great production, great writing and songs that we will be singing for years to come. I think they are on to Something Big!