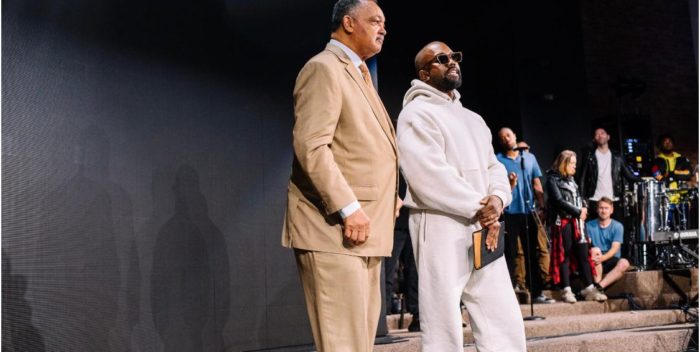 When asked how this came about, Jenkins shared, “About 6 months ago I was talking to Kanye and he was saying how so many people are in so much pain and in need of hope. He said to me that he wanted to use his approach to music to bring hope to people and lift them up. So, when I heard that they were coming to Chicago, I called my friend Jason White (The Sunday Service Choral Director) to invite Kanye and The Sunday Service Collective to Fellowship and they came 200 strong! They sang about Jesus and His word for more than an hour and all of the feedback from people who were present has been deeply moving.”

“It was epic, it was everything! You could feel the power of God coming through their voices.” said Rita Lee, a Chicago native and Hip-Hop music executive. Aneisha Titsworth said, “The world needs this. I came looking for Kanye and found God.” Singers from The Sunday Service Collective were spread throughout the south-side sanctuary and began singing spontaneously, flash-mob style. People danced, smiled, and cried as gospel music classics and soulful remakes rang throughout the church.

In a powerful homecoming moment, Kanye West, remarked with authority, “This is The Chi” evoking even more passion and volume from his collective of singers as the crowd cheered him on. After more than an hour of singing, the room exploded to new levels of euphoria when West performed his Grammy winning mega hit, “Jesus Walks.” “He’s one of ours,” said one proud attendee, referring to West’s Chicago upbringing. Reverend Jesse Jackson, who was also in attendance said, “It was so good to fellowship with Kanye today. He is a special and unique talent.” Inviting Kanye West to Fellowship is another example of Jenkins’ #PositiveAir philosophy of spreading inspiration wherever he can, and it also reflects the spirit of his current Billboard Top 25 Gospel Airplay radio smash, “Keep the Faith.”