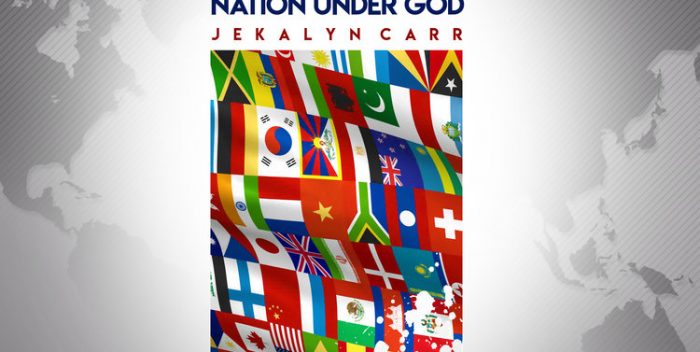 AND READIES NEXT RELEASE: ONE NATION UNDER GOD

ONE NATION UNDER GOD is a call for all of God’s people to unite as just that, removing the limitations of race, religion, denomination, organization, locale, gender, or class. With this new release, Carr addresses how God desires to see His people, and how we should see ourselves – as one united body of believers. God’s love for us all is consistent. The same love, grace, and mercy that He extends to one, He extends to all. From America to Africa, to Russia, to Asia, and all around the world – God’s love is able to reach all and cover all.

ONE NATION UNDER GOD will be Carr’s second live recording, and comes on the heels of its sole predecessor, the popular and widely celebrated The Life Project, which has been considered by many as Carr’s coming-of-age release. The live setting set the perfect stage upon which Carr could seamlessly blend her music and her inimitable, dynamic ministry. The powerful scenario resulted in The Life Project becoming her first #1 album, and producing her first #1 single (“You’re Greater”), garnering multiple nominations for The Stellar Awards, and her first nominations for both the Grammy Awards and the Billboard Music Awards.

ONE NATION UNDER GOD will, once again, place Carr in a live setting, surrounded by worshippers and people after God’s own heart, as she presents her new music and creates an atmosphere of unity and solidarity among the people of God.

ONE NATION UNDER GOD is more than a recording – it is a movement; a call to action.

All roads lead to Brown Baptist Church in Southaven, MS on June 22ndas Carr presents ONE NATION UNDER GOD.  Doors open at 5:30 and attendees are encouraged to arrive early to insure their place in this room which is guaranteed to release a sound and a charge that will shift the mindsets of separation and designation, and restore an atmosphere of unity and inclusion.