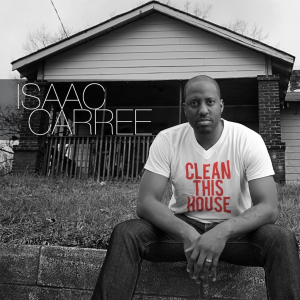 AND IS #2 MOST ADDED SINGLE AT RADIO

Atlanta, GA (January 23, 2013) – Fresh off of a big night at the 28th Annual Stellar Awards where gospel music star Isaac Carree claimed the Producer of the Year honor, his brand new single, “Clean This House” has made its debut on both iTunes and the Billboard charts.  Showing early signs of becoming another major hit for the singer, “Clean This House” debuted at #28 on Billboard’s Gospel Songs chart after being released just last Tuesday.

On “Clean this House”, an introspective and earnest ode, Isaac implores God to renew and restore him “from the inside out”.   And he passionately sings of God’s power to affect positive change in everyone’s life in spite of any shortcomings.  Since its release the song has become gospel radio’s second most added single and is being embraced by both gospel and urban formatted stations across the country including, WPRS-FM (Washington, D.C.), WPPZ-FM (Philadelphia), WWIN-AM (Baltimore), WGRB-AM (Chicago) and WPZE-FM (Atlanta) .  “Clean this House” was also the buzz of the Stellar Awards weekend, where Isaac participated in a variety of activities including a celebrity basketball game, BMI’sAnnual Trailblazers of Gospel Awards and the REACH Awards, for which he performed the single live for the first time.

Recognized by the Stellars for his first solo album, Uncommon Me, which was one of gospel’s top selling CDs of 2011, Isaac  has embarked on a new project from which “Clean this House” is the first single.  About the great response that the single is receiving he says, “I am grateful and overwhelmed by the love.  When God gave us this song, I prayed that it would prick the hearts of people, including me, to want to be different and changed.  Since I released it, I’ve heard from so many people across the nation, telling me that the song resonates with their hearts. And like those people, it has been my prayer – ‘clean this house, from the inside-out.  Restore me.  Take away my impurities.’”

Isaac Carree’s yet to be titled new CD, which is scheduled for a summer 2013 release, is the first venture between his label Door 6 Entertainment and Central South Distribution.

Please visit www.officialisaaccarree.com and keep up with Isaac on Twitter (@Isaac Carree) and