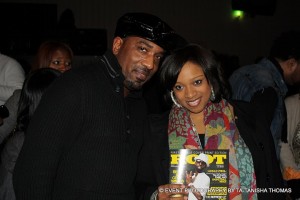 Kierra Sheard is undoubtedly one of the greatest young vocalists of the new generation. She comes from a lineage of singers who not only influence gospel singers; many secular artists look to the Clark Sisters as the template for “Soul Singing” as well and Kierra Sheard has that same effect on Generation NOW.

At the tender age of 24, she has released four albums, a mix tape and a… Just Until and she has done it all while finishing up not only High School but college as well. On the eve of her fourth full length album entitled “Free”, Root was able to get a few minutes with Ki Ki (as she affectionately called) and she was one of the most humble persons you would ever want to meet. A week after it’s release, “Free” reached #1 on the Billboard Gospel Charts and at press time sits pretty at the #3 spot. If you don’t have the album, it is one of her best so go pick it up NOW!

Root: Your new album entitled “Free” is out and was highly anticipated if I may add. What was your thought process about doing your first LIVE album?

KS: I was very nervous because I always doubted myself as far as my skill when it came down to doing stuff LIVE. Also, with it being with a choir when I am usually by myself and I also wrote majority of the album so I was also doubted my writing skills. However, it challenged me to step my game up and re-brand myself.

Root: Well it definitely worked because the album is amazing.

Root: Now you mentioned writing majority of the album yourself. What songs did you write?

KS: There are 14 songs of the record and I actually wrote or co-wrote all but two.

Root: That’s great! Congratulations on that. I remember interviewing your mom and she was so excited about your next project being under the “Family Business”. So how do you feel being signed under Karew Records and keeping it in the family?

KS: It feels really good because I have more creative freedom to show myself and that’s what this record does. Many people ask me “Why do you say that this is your best record”? I think it’s my best record because it is really from my heart and my brother inspired me so much and we just pulled from one another.

Root: We knew from you being featured on your mother’s album at 10 years old that you were destined for this but I love the fact that in the midst of making records and touring that you still made time for school. I would see you on Twitter talking about doing papers and all of that and you finally graduated this year. How important is it to not only follow your dreams but also still get an education?

KS: I think it’s very important because in the era that we live in, the game is always changing and we look at how music was back in the day and they look at our music like “That is a mess”. We think what we are putting out is amazing so I always keep in mind that there is someone behind me that can do exactly what I am doing or better and that challenges me to make sure that I have an option because there is always someone being raised up that can move you out of the way. So I will definitely say that it is important to have an option and realize just because you have the gift that does not mean that is what you were called to do. I have been getting many requests to do more speaking engagements and although many people call me to sing, so many people want to hear me speak. When I did my first album, people would tell me that I was called to preach and I would brush it off and now I see it and I actually love teaching and I have a heart for young people, not just because I am young but because I know the things that we as young people face and the access that we have to so many things. But I definitely love teaching.

Root: The teacher in you is definitely preparing you for your new role as First Lady. When is the wedding?

KS: The wedding is next summer and I am very nervous. I am a daddy’s girl and when I talk to some people, they just act like they have a fairytale marriage and it’s crazy because now that I’m engaged I always look at people’s hands to see if they are married so I already spotted that you were married.

Root: (Laughter). Yes I have been married going on nine years now and marriage is good but it’s a lot of work. You have to consistently work at it.

KS: That’s what I hear. I’m really excited about it though and I love building the kingdom, thinking of creative ways to win souls. I love it when hardcore guys come to Christ…. there is nothing like it! But to answer your question, I’m looking forward to being married to my fiancée, Pastor Welton Smith. His church is a youthful church but they actually have some church mothers in there. The mothers back in the day would tell you that you smelled like sin if you weren’t living right so you need that balance in a church. We were leaving Sounds of Market today and there was an older homeless lady outside and she looked at us and said, “You all are spiritual”. She didn’t say “Hello” or anything and it reminded of how my grandmothers are. Then she looked at me and said, “You sing, don’t you?”

Root: Throughout your musical career, have you felt a little pressure? Your mom is Karen Clark Sheard and Twinkie is your aunt. You gotta feel some type of pressure.

KS: Honestly I don’t. My mom was not the type to pressure us to do music. The one thing about my parents was that they were supportive in whatever I did, whether it was Cheerleading, Volleyball or Hair- Stylist. I will say I do feel a sense of responsibility as far as carrying my own and not coming in the game saying, “I’m Ki Ki and I’m here”. The good thing about it is I grab wisdom from them because they have been in the game for so long and if I’m Karen’s daughter and Twinkie’s niece and I’m not doing anything with that title, nobody will listen.