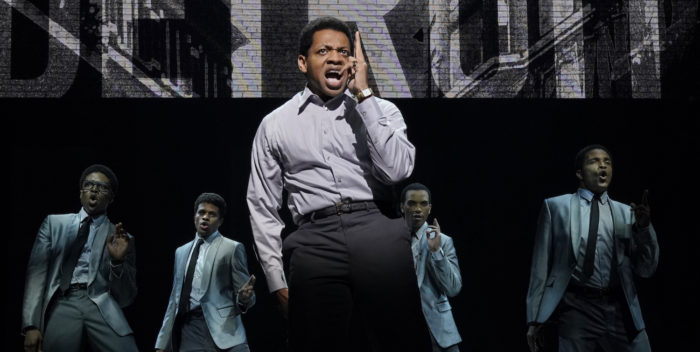 Ain’t Too Proud- The Life & Times of The Temptations

Just like the mini-series that released more than 20 years ago, “Ain’t Too Proud- The Life & Times of The Temptations” is indeed a masterpiece!

Told from the voice of Temptations founder Otis Williams, “Ain’t Too Proud,” highlighted all of The Temptations (24 in all) throughout every period of their life since the early 1960’s. The story was funny, provocative, very entertaining, even more telling, yet still managed to keep the same rhythm and integrity of the miniseries that we all seem to watch whenever it comes on television.

Occasional appearances from The Supremes made “Ain’t To Proud” reminiscent of other Broadway classics like “Jersey Boys” and “The Color Purple”, with a great storyline and even greater talent to move the story along with ease.

Ephraim M. Sykes, who portrayed the complex David Ruffin, stole the show with his heavy tenor and electric dance moves, while the rest of The Temptations cast were not too far behind, staying in formation with precision and grace. Simply put, these guys can sing and dance, as every number they did from “Ain’t Too Proud To Beg” to “My Girl” was met with a thunderous applause and a standing ovation.

“Ain’t Too Proud” in essence will make you proud, as the cast subliminally paid homage to Dr. Martin Luther King, Jr., as they took a knee after hearing of his death, while singing their classic ballad “I Wish It Would Rain.”

This play is Must See Broadway!