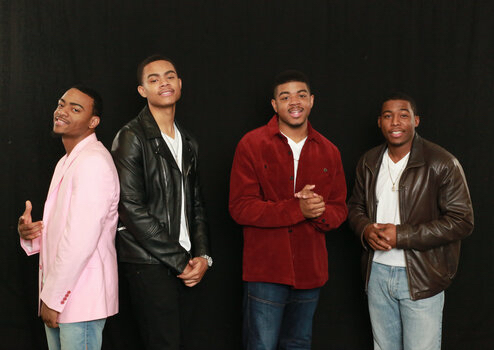 THE GROUP FIRE  SETS GOSPEL WORLD ABLAZE WITH ITS BILLBOARD NO. 1 HIT – “MORE THAN FRIENDS”

The fiery gospel foursome known as, Group Fire, has scored its first Billboard Gospel Airplay chart no. 1 hit with the scorching up-tempo jam, “More Than Friends” (Jet Records North / East). In its 20th week on the national survey, it leaps from last week’s position of No. 5 to take the top spot for the week ending January 16th. “We are so humbled and amazed by the love the gospel music industry has shown us over the last two years,” says lead singer, Terelle Cooper, 24. “This everything that we’ve ever dreamed of for our group and we are so grateful to the programmers for playing our music and welcoming us into the gospel industry with open arms.”

The track is the second single from the group’s forthcoming third album, Heal the Land (Jet Records North/East), which is tentatively scheduled for a third quarter 2021 release. “We wanted a name that was special,” Terelle says of the boy band’s unique name. “We saw where God used fire a lot through the Bible, with Moses and the Burning Bush, the Hebrew Boys in the fiery furnace, Elijah with the chariot of fire, etc. We figured the same way He used fire in the Bible, we want Him to use us as well.”

The Newark, NJ act consists of two sets of 20 something brothers – Terelle and Juwan Cooper, Tajohn and Al-Shamir Hill. They all started singing together at the Palm Garden Holiness Church where the Coopers’ grandfather, Bishop T. Cooper, is the pastor. Bishop Cooper noticed the young group’s talent and started funding their recording sessions. The Coopers’ father, Steve, started producing their music and the result was their debut album, It Takes a Village, in 2012. Their 2018 sophomore set, Join the Praise Party, earned them a Stellar Award nomination in the category of Quartet of the Year. In 2019, their ballad “Again” rose to no. 17 on the Billboard Gospel Airplay chart, spent 28 weeks on the chart and led to two Stellar Award nominations in the categories of Duo/ Chorus Group of the Year and Contemporary Duo/Chorus Group of the Year. They were named in the Top 5 New Artist of the Year by Billboard Magazine in December 2020.