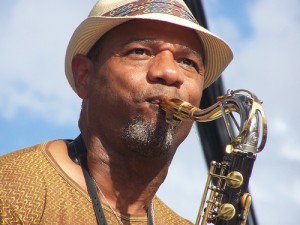 Kirk Whalum is a legendary saxaphonist that has 11 Grammy nominations under his belt. The amazing part is that four of those nods was achieved this year in four different categories; Best Pop Instrumental Album, Best Male R&B Vocal Performance, Best Gospel Performance and Best Gospel Song. Jazz music fans love the smooth sounds of Kirk Whalum and now he has been introduced to an entirely new audience of gospel music enthusiasts with his “The Gospel According to Jazz” series. Root Magazine caught up with the busy musician a few days after he found out he was nominated yet again for four more Grammys.

Root – Congrats on your four Grammy nominations. Four nominations in four different categories is unprecedented! What prompted you to do an album solely of Donny Hathaway songs?

Kirk Whalum – I have been a Donny Hathaway since I was 13 years old, maybe earlier. Before I started playing the saxophone I was messing around with the drums and the bass. On the bass, the first song I actually learned was “Everything is Everything”. Basically every bass player that is worth his strings knows that solo, everybody from Marcus Miller to Stanley Clark, whom ever, Willie Weeks is a bass players bass player. So I learned that solo when I was like 10 or 11. Donny was a huge influence throughout my entire career. A producer by the name of Matt Peterson came to me with this idea and I must be clear that it was all his idea. He had every detail worked out and sold me on the idea immediately.

Root – The Gospel According to Jazz series has basically taken a life of its own. You are on your third installment. What are some popular covers that you’ve done of some gospel artist?

Kirk Whalum – To clarify that question, we haven’t done a lot of covers of gospel groups but we have several kinds of motifs that run throughout the series. One of the motifs is to always work with artists who are not classified as “Christian artist”. Another motif is that we like to take R&B and pop songs and put a spin on them and change the lyrics around to represent a fuller meaning of the lyrics; like “Make Me a Believer” and “Running Away”. We want to prove that God is the creator and all creativity comes from him. Satan hasn’t created anything and for people to say that this music is the devil’s music is absurd. There are also some romantic songs on there as well because romantic love comes from God too. I’ve been married for 30 years and I am madly in love with my wife. When we take it and spin it from a worship perspective, we like doing that because it kind of proves a point.

Root – Who are some of your influences?

Kirk Whalum – I grew up in Memphis so I have many. Music is in the water in Memphis, you know. Gospel music was the very first and I am still very much influenced by the great gospel singers. Aretha Franklin and Chaka Khan were huge influences as was Whitney Houston. When I first started working with her, I was like “You know you were like my biggest influence.” I have this interview that I showed her from years before I met her that said I would like to play like Whitney Houston sings. After that I ended up playing for her for years. So as you can see, I have a lot of influences on the R&B side but on the Jazz side there are a plethora of them; from my mentor Arnett Cobb, to people that I was able to get lessons from like James Moody, Dean Crawford and of course the great John Coltrane.

Root – What’s it like being CEO of both the Stax Museum and the Music Academy with Stax being such a big influence especially in the Memphis area?

Kirk Whalum– It is a statistical fact that Stax music is the most sampled music in the world. Stax music is global across the world and people automatically know a Stax record when they hear it, whether in the Ukraine or in Australia. To answer your question it’s a very big honor and responsibility and challenge rolled into one.

Root – What are your responsibilities as the CEO?.

Kirk Whalum – Primarily having a vision for the organization and after that the most important thing is fund raising. We are a non-profit organization and we do a lot of great work in not only preserving this incredible legacy, but paying it forward in the lives of young incredible musicians. Many of these kids are in their teens, many of them from the same neighborhood as Maurice White, David Porter and Isaac Hayes. My primary responsibility is to raise awareness, visibility and money. I also get to work with the kids… I’ll come in and challenge them and give them hands on access to someone that is actually out here in the industry.

Root – What brings you to Philadelphia?

Kirk Whalum – We’re here doing a concert at the Loews Hotel. I love Philly so much and my wife and I just love the food! Philly has some of the best restaurants in the world and the culture is great; not to mention, Donny Hathaway was loved here in Philadelphia. When we re-did “Everything is Everything”, it just so happened that we did it with an all Philadelphia band so you can kind of say that this Grammy nomination kind of goes to Philadelphia; Christian McBride on Bass, Little John Roberts on drums, John Stoddart on keyboard and Jeff Lee Johnson. Like I said they are all Philadelphians!

Root – You’ve been in the business for over 25 years now. Who would you like to work with that you haven’t worked with yet?

Kirk Whalum – Bobby McFerrin and Brandy. I worked with Brandy a little when I was working with Whitney but I would love to record with her. I told her that and she just chuckled but I was serious. I just love what she does with her voice, its spiritual; the same thing with Bobby.

Root – Wow, Bobby McFerrin where has he been?

Kirk Whalum – He actually lives here in Philadelphia! He moved here from San Francisco about 15 years ago. I ran into him on the train a year ago between here and DC. He’s such an amazing innovator.

Root – Working with Brandy would be a perfect combination.

Kirk Whalum – I’ve played on a couple of records that a couple friends of mine produced for her dad. He was a gospel singer, so she and I both were on that record.

Root – Well hopefully that will happen soon. Brandy I hope you read this.. (Laughter)