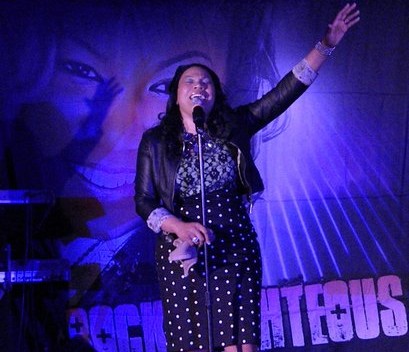 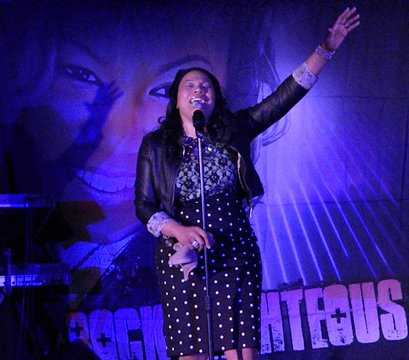 It was an unusual way to spend a Friday night… at church with the lights out. But nearly 400 people sat in the dark waiting to share in the anointed ministry of Jovita Sheppard. Neon lights and stage lights illuminated the room filled with worshippers who joined from all corners of New York city. Anyone familiar with Jovita’s ministry knows it as an opportunity to join her in worship.

She is a trendsetter, being the first artist in the Christian Pop category for Universal Records. She is a movement, answering the call to Rock Righteous and encouraging others to do the same. And she is anointed, as evident in the amazing experience that would result for everyone present.

She began the listening concert with an explosive rendition of her lead single-GLOW. She followed with 3 additional Christian pop songs from the CD- Rock Righteous, Still In Love, and Clear My Line. But it was her 2nd set that relocated the room into the Holy of Holies. With her originals Reason and Shine on Me, the audience was moved to worship God like Sunday morning. She closed the evening with a medley of CCM standards including Agnus Dei by Michael W. Smith and Hosana by Israel Houghton.

We wouldn’t be surprised to see Jovita’s ministry aligned with the likes of Jars of Clay or Micah Stampley. God has certainly prepared her for the next level and we are excited to watch her grow. The CD entitled Rock Righteous is set to be released on April 26, 2011. You can download it from iTunes so mark your calendars. You can also read more about this artist on Reverbnation.com

Lucinda Moore Is Back! Inks Deal with New Day/SONY Orchard