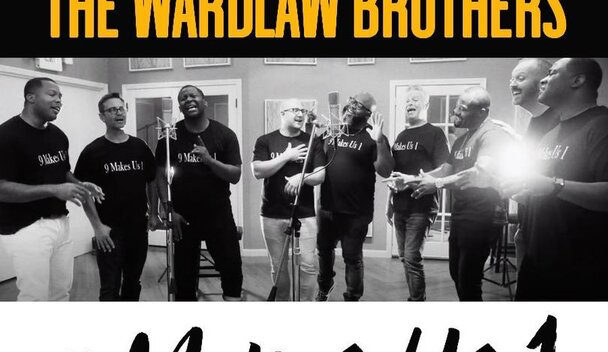 Nashville, TN –Legacy Five and The Wardlaw Brothersare two groups, from two genres of music traditionally separated more often by race than by the style of music.  Legacy Five is in Southern Gospel which consists of predominantly white artists.  The Wardlaw Brothers are in Gospel which is made up of predominantly black artists.  It is understood that music is divided into genres for industry cataloging purposes and creative stylistic referencing.  But music too often has a racial divide that supersedes creative content.  The Christian music genre is not exempt from its own dilemmas of racial division.  Racial barriers exist in an industry of believers who write and sing about the one God and His one Kingdom.  Also, the current climate of our nation is plagued with reoccurring racial injustices and cultural clashes.

But now, Legacy Five and The Wardlaw Brothers have joined together to be an example of one unified body.  Legacy Five and The Wardlaw Brothers unite for a ground-breaking collaboration called “9 Makes Us 1″.  Their nine voices fuse under the nine Fruit of the Spirit – Love, Joy, Peace, Goodness, Faithfulness, Patience, Kindness, Self-Control, and Gentleness to convey one message – unity. This effort is a strategic and God-appointed mission to desegregate Christian music genre classifications by putting race aside to demonstrate black and white men bonding in a multicultural cohesive environment all to the glory of GOD.  The result is a beautiful and influential song of the same name “9 Makes Us 1”.“9 Makes Us 1 is a powerful song of unity that our nation and the world need to hear now,” says Tony Wardlaw of The Wardlaw Brothers.

“The song simply says that there is no place for hatred and that we all need to have empathy for one another.  We must consider what it’s like to walk in each other’s shoes and try to look past each other’s differences to live and survive as one – just as Christ Jesus would have us all be one.”“When I was first approached about Legacy Five joining forces with The Wardlaw Brothers, my answer was an immediate YES!  We’re in!” Scott Fowler of Legacy Five states.  “The recording session was an amazing day of unity and brotherhood.  I know the Holy Spirit was there and this is not a publicity stunt for either group.  We are men of different backgrounds coming together with one goal – racial unity.  And, what better way to do that by being an example of the nine fruit of the spirit that make us one.””9 Makes Us 1″ is written by Luther Wardlaw and produced by Tyrone Dickerson and Luther Wardlaw.

This monumental musical effort will be available on all digital music outlets on October 16 released by Daywind Music Group, TWB Records and The Orchard.   The single will premiere exclusively on Monday, October 12 at 10 AM eastern on all SiriusXM Christian Music channels – Enlighten Channel #65, Kirk Franklin’s Praise Channel #64, and The Message Channel #63.  Legacy Five has earned four GMA Dove Award Nominations that include two 2020 nominations  for Southern Gospel Song of the Year for “What Kind Of Man” and Southern Gospel Album of the Year for PURE LOVE.  They were also awarded The Southern Gospel Music Association Recording of the Year.

Their rich four and five-part harmony is delivered by group members Matt Fouch (bass), Bryan Walker (baritone), Scott Fowler (lead), Lee Black (tenor), and Josh Townsend is the group’s pianist. The Wardlaw Brothers have become one of Gospel music’s most notable groups with their incredibly tight vocal arrangements and dynamic stage presence.  Tony, Luther, Carl, Jamie, and Rodney Wardlaw are biological brothers who have garnered a Stellar Award nomination for their GOD’S BEEN THERE album and a GMA Dove Award Nomination for their #1 Billboard Gospel Album STAND THERE.

Many social situations plague our world and sometimes seem hopeless.  But, through Christ and the power of unity, healing and change can be accomplished.  By believing and actively applying the fruit of the spirit, a wellspring of hope can be ignited and we can all live united as one.  That is the hope of 9 Makes Us 1.