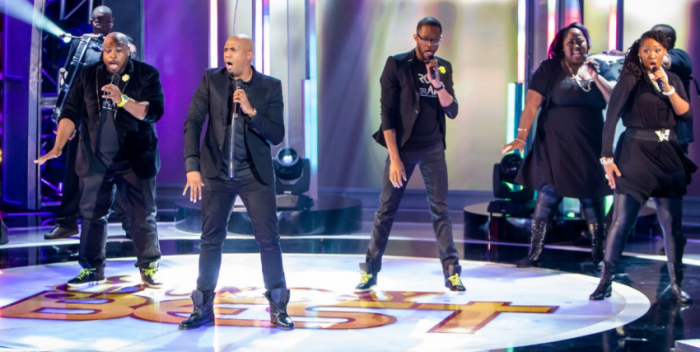 GOSPEL’S HOTTEST NEW ACTANTHONY BROWN & group therAPySPEND 19TH WEEK AT #1* ON BILLBOARD GOSPEL CHARTEARN GRAMMY ® AWARD NOMINATIONAND TEN STELLAR AWARDS FOR #1 “EVERYDAY JESUS” PROJECT (Washington, D.C.) – In an age where the recording industry is bemoaning declining record sales, Anthony Brown & group therAPy is celebrating incredible success with its sophomore album “Everyday Jesus” (Key of A/Vman/Tyscot Records, LLC). The album debuted at #1 on Billboard Magazine’s Top Gospel Albums sales chart and #11 on its Billboard 200 Pop albums sales chart last summer. The bestselling album’s lead single, “Worth” (#1 on Billboard’s Gospel AirPlay radio chart for 19 weeks) has earned the group its first Grammy® Award nomination for Best Gospel Performance/Song. The 58th annual Grammy Awards take place February 15, 2016 at the Staples Center in Los Angeles and will broadcast live 8-11:30 p.m. EST on CBS Television.   The dynamic group has also earned ten Stellar Gospel Music Award nominations (the gospel industry’s answer to the Grammys) – the most of any artist this season – for the project as well, including the coveted Artist of the Year and Song of the Year categories. “Wow…is all I can say. I am so honored and extremely humbled to be nominated,” said Brown. “I have a great amount of respect for The Stellar Awards and for all of the artists who share the gospel around the world. I’m elated to be considered amongst them.” The 31st Annual Stellar Awards take place February 20, 2016 at the Orleans Arena in Las Vegas, NV and are scheduled to air on the TV One cable network. Son of a well-known Baltimore, MD area pastor, Brown formed the group Answered Prayers in 2000 as a showcase for his songwriting skills. His early songs were recorded by a number of artists such as Maurette Brown Clark who earned a #1 hit with his tune “It Ain’t Over” in 2006. He later changed the ensemble’s name to group therAPy with the capitalized AP as a reference to its previous name.  The group’s self-titled debut album premiered in 2012 and spawned the Top 5 radio smash “Testimony” that spent an unprecedented 74 weeks on the Billboard Magazine Gospel AirPlay chart, a chart record. Anthony will also appear on the cover of the next edition of Root Magazine that will be released during Stellar Awards weekend in Las Vegas next month.