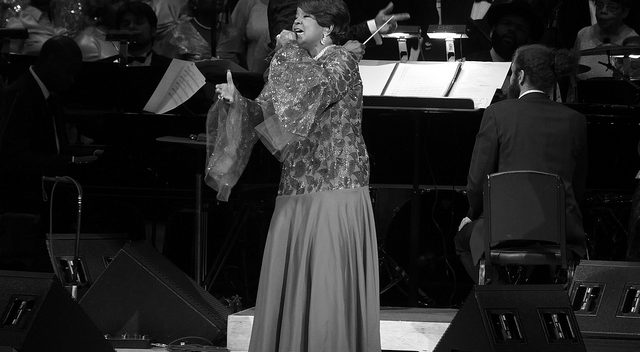 From the very moment you walked into the iconic Carnegie Hall dramaturgy, you felt the presence of excellence. Underneath the silhouette of the stage background spelling out Night of Inspiration, a 200 plus voice choir and full Orchestra waited in anticipation to perform the Stevie Wonder penned “Higher Ground,” sung by former Mariah Carey singer, Melonie Daniels- Walker. Once that curtain ascended, there was no turning back; from the amazing gowns and tuxedos worn by the musical guests, to the classic songs that were sung, Carnegie Hall will never be the same! Two- time Grammy® winner, Hezekiah Walker, had everyone in the building singing and shouting “Every Praise,” while Kenny Lattimore and Ledisi rocked the house with The Beatles classic “Come Together.”

Rev. Al Sharpton introduced the Queen of Gospel, Shirley Caesar to pay tribute to the Queen of Soul, Aretha Franklin with one of the hit songs from her double platinum LP Amazing Grace, “Oh Mary Don’t You Weep.” When Caesar began to comand the stage and the orchestra got in sync under the direction of the incomparable Ray Chew, every living person was in awe of her showmanship and proved why after 60 years she is still a force to be reckoned with. Cantor Azi Schwartz came in with “Bridge Over Troubled Waters” which was a perfect segue for the classical gospel sound of Richard Smallwood with one of his biggest songs, “Total Praise.” As with every NOI show, Ray Chew had to go off script as the entire audience went up in a praise that just could not be contained, as the SOLD OUT crowd sang the Hallelujah chorus acapella…what special moment.

As the night went on, we were blessed with words from Iyanla Vanzant, a medley of hits from by Israel Houghton, Regina Belle, Travis Greene, BeBe Winans, RCA Inspiration new comer, Koryn Hawthorne, who sang her #1 Billboard hit, “Won’t He Do It” and multiple Stellar Award winner, JJ Hairston who took us to a place of worship with the future classic “You Deserve It.” When you have the Queen of Gospel in New York City, you have to let her “Sweep Through the City” and she did just that and it was so refreshing to see people of all nationalities and cultures praise the Lord through song.

As Director of this auspicious event, Ray Chew was remarkable as he mastered the fusion of gospel and classical without compromising the sacred genre. As Executive Producer and visionary of Night of Inspiration, former record executive and wife of Ray Chew, Vivian Scott- Chew, produced another amazing faith filled event that will be talked about until it comes back to the famed Carnegie Hall stage next year.