Anthony Evans Jr., is the son of a preacher man and since he was born, the bar was set very high because of who his father was. Dr. Tony Evans is a world renowned preacher, teacher and author, while Anthony, his namesake, is  a singer and actor who found his true passion later in life.

Root Magazine’s Editor-In-Chief, spoke to Anthony about his new book Unexpected Places (released today, Tuesday, August 21, 2018) and what it was like Growing Up Evans.

As Told to Hasan James

Root: Your song “See you Again” is one of my favorites.

Root: Yeah man, absolutely! I guess my first question would be, prior to you being a contestant on The Voice, you already had a couple of albums under your belt. I want to know, did being on The Voice help you find your voice on another    level?

Anthony: Being on The Voice helped me broaden my horizon and see what I was capable of. When you’re in Gospel/Christian music it can be a very narrow. With The Voice, there’s some things that happened on camera, but most things that happened off camera, The Voice encouraged me and let me know that I was capable of more. But not more in the way of discrediting what I was doing, more in the way of getting the message of my faith outside of my box.

Root: Everyone knows you come from a very famous family. Your dad, Dr. Tony Evans, has blessed millions with his preaching and with his books. What was it like “Growing up Evans”?

Anthony: You know, my dad’s an amazing person. The first thing I have to say about him is that he’s the same man on stage as he is at home. And you know, I feel like preachers  are always like one degree from crazy! Like, when you’re dealing with somebody who’s the same at the house, it helped me in my faith to realize this is real, you know what I mean?

Anthony: My dad was not moved by much. When he wasn’t the most popular speaker in the world, he would still do what he was called to do. He didn’t change his message to become who he was. He stuck to what he believed and in turn, it has paid off. And so, growing up as his son has been an honor and a privilege. However, it also comes with hardship because I’m dealing with the fact that I have the same name as this great man. In the first chapter of the new book I wrote, Unexpected Places, I talked about being in a Texas stadium back when it was the thing to go to as a kid. It was huge. Being in Texas stadium with 100,000 men cheering as my dad came to the conclusion of his message was amazing to see, but I remember being backstage thinking I could never be him. 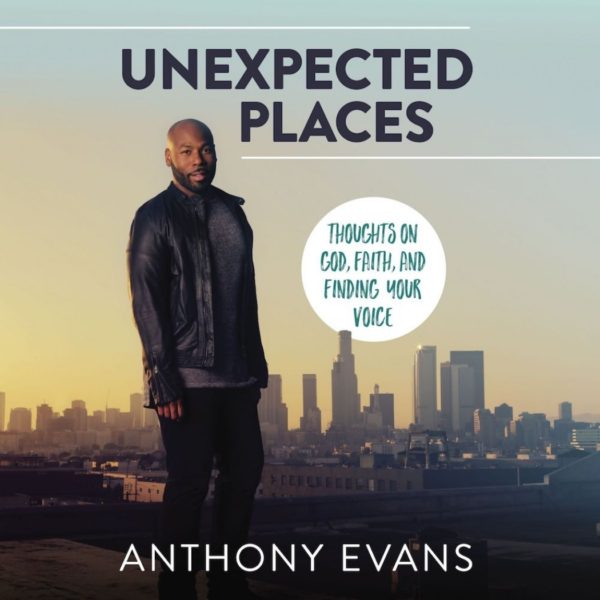 Anthony: And nobody did that to me. You know what I mean? I was just, I saw 100,000 people screaming and thought, whoa. It feels like being a spiritual Michael  Jordan’s son and everybody expecting me to know how to dunk!

Anthony: So that can be a lot of pressure and everybody’s looking at you like, “Your daddy can do it, why can’t you?” You know what I mean?

Root: Okay well with that being said, how were you able to then create your own path?

Anthony: You know, I’ve never been afraid of choosing faith over fear or courage over comfort.  I’ve always wanted to figure out what God had specifically for me and I had people speak into my life early on. Like, “Anthony, we know you have the same name, we know that your dad is this, but there is a purpose.” The foundation has been laid, but there’s something for you that may be outside of that box. So I was just never afraid to explore what God had placed in my heart.  You know what I mean? Not my heart because of what’s around me. Because of what surrounded me. I just wanted to explore my own path and God would open doors as he sees fit that might not necessarily be in line with what people expect of me.

Root: Speaking of your book, Unexpected Places, I got a chance to read it and found it very intriguing. One thing that stuck out to me was the story where you talked about working in ministry and you were really tired and you were making like $50 a week, breaking down the set and all that. And I’m reading this and I’m just like, “Wow, he really had to endure a lot.” And one thing that stuck out to me was when you stated, “Why is success in ministry always measured by how busy you are?” And that really just kind of pierced me because growing up in church, you see it all the time. Pastors are pretty much killing themselves for the sake of the ministry. Is that something that you saw growing up?

Anthony: I just think that for some reason when we think about ministry, it always comes with a sacrifice. But I think we go too far and we start sacrificing our well    being for the sake of ministry. And I’ve seen people who have the capacity to do more. My dad does not get phased by much and he’s a work horse who can do everything from preach these amazing sermons on Sunday to being in a meeting about the carpet colors of the church. He goes from one extreme to the other. I don’t have the capacity for that. So I used to judge my success on other peoples way of doing things.

Root: Your role as “The Beast” in the Disney classic, “Beauty and the Beast” has been given rave reviews. How has it been working with some of Hollywood’s elite?

Anthony: I always count it a privilege that when my phone rings and I get a call from  Disney that they could have cast anybody for that role and they casted me alongside people like Zooey Deschanel. Everything happened so fast, I was chilling and then all the sudden I’m on stage. I realized how important it is to be faithful in the things that seem inconsequential because they are ultimately of consequence.

Root: What audience are you trying to reach with Unexpected Places?

Anthony: You know, obviously I want to reach believers. But at the same time, I want people to be able to read the book and identify with me because I’m leading with authenticity, vulnerability, and transparency. My calling is not just to the church and I’m not trying to be some major crossover artist and all that stuff. I’m just saying, I don’t think any of our messages, when it comes to us being that church and in ministry, it should not just be for the people inside of the four walls. My dad always equates it to the huddle. You don’t go to a football game to watch a huddle. You go to a football game to see what difference the huddle makes. And that is the purpose of my book. I want people to see the difference the huddle has made in my life so that they decide in their lives, “You know what, I’m not just gonna talk about this anymore, I’m gonna do it.”

Root: You’ve accomplished a lot in your 40 years. You’ve had a couple albums, you’re an author and an actor. What’s next for Anthony Evans?

Anthony: You know, there’s a few things that have been in the works but at this point I just want to live life to the fullest and whatever I do needs to be purposeful. Last week a very young family member of ours with four kids passed away and when stuff like that happens, you reevaluate everything you’re doing. You asked the question, what’s next for me? My answer now is way different then what it would have been a week ago.

Root: Last but not least, Are you fulfilled?

Anthony: You know what? I am. I am fulfilled for one main reason. I’m fulfilled because of the fact that when I was 25 years old my dad told me something that I’ll never forget. He said, “Anthony, you have to redefine what success is to you.” Success isn’t having your name in lights. Success isn’t having a number one album,     because ultimately when you set yourself up with defining success that way, you’re ultimately gonna be failing because nobody’s name stays in lights       forever. And nobody’s on top of the charts forever. My dad would always say, “You cannot be number one, get a bunch of money, and then go write a check for peace. You can’t do that.”