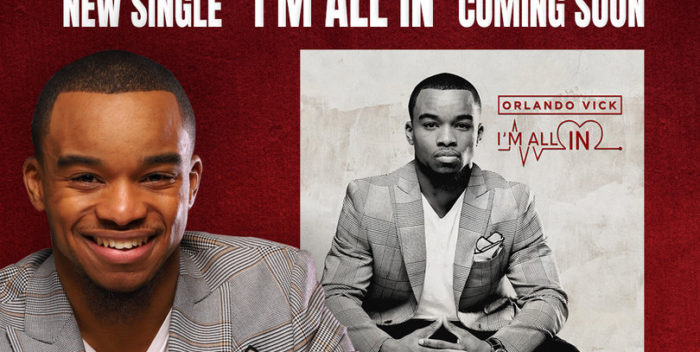 OCTOBER 1, 2019,  (Philadelphia, PA) After the 2016 release of the infectious hit song “Nothing Like You,” emerging artist, Orlando Vick is back with a new single entitled, I’m All In. Penned by Vick and produced by GRAMMY® winning producer Kevin Bond, Carlos Eduardo da Costa and Glenn Barratt,  “All In is a place that I was trying to understand faithfulness, commitment, dedication and loyalty. Being All In, with the one you love, family, friends and with your companion,” says Vick when asked what was his inspiration behind penning the future Billboard charter.

The 29 year-old is also celebrating his recent partnership with Philadelphia’s Enon Music Group. As he readies his debut project for EMG, the emerging vocalist and father of two daughters, is set to  offer a mixture of worship and uptempo songs with meaningful lyrics. His previous effort, Nothing Like You was penned by Vick and produced by Bond as well. The song is an affirmation that in spite of everything going on around us, there is simply nothing like God. He has also collaborated with award winning writer/producer, Percy Bady on other songs from his forthcoming debut.

Orlando Vick is more than just an artist, he is also a philanthropist and founder of Wounds Healed Out Loud (WHOL), an organization that provides therapy and support to individuals who face personal challenges in life by embracing their gifts and telling their truth through various genres of clean, motivational and inspirational music, while creating a platform of healing for all people and religions.

Vick has been fortunate enough to grace the stage with a Who’s Who of Gospel industry trailblazers, such as Marvin Sapp, Donald Lawrence, Tye Tribbett, Michelle Williams, Smokie Norful, Myron Butler, Kierra Sheard and many more.