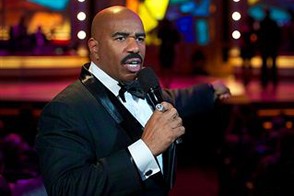 And Ends His 27-Year Stand-Up Career

LAS VEGAS, NV (July 31, 2012) – Comedian Steve Harvey headlines his final stand-up comedy show on August 2 at the MGM Grand Garden Arena in Las Vegas, celebrating the end of more than 27 years in stand-up comedy. But fans who can’t get to Vegas still have a chance to experience his side-splitting humor via a live Pay-Per-View (PPV) telecast available on cable systems around the country. The two hour special farewell performance, Steve Harvey’s Grand Stand-Up Finale will air live from Las Vegas on cable Pay-Per-View August 2nd at 11 PM EDT/8 PM PDT.  After the live show, fans will still be able to access the special via cable PPV for several months and also on Video On Demand (VOD) beginning on August 3. The show is available in both standard and high-definition.* Schedule of replays and location of the content is listed below.

Plus, cable’s Free On Demand category is now featuring short video pieces featuring a conversation with Mr. Harvey and rare clips from his stand-up career, including reflections on his longtime career and being called a “King of Comedy.” Here is one of his insightful comments: “[Stand-up] is a lonely place. Comedy is crazy because it’s the one thing you can’t take a lesson for. I could take a lesson in being a cameraman, a soundman, an actor, a skydiver. I could take pilot lessons, voice lessons, acting lessons, scuba diving, bungee jumping, kayak, piano, drum lessons.  But there’s no schooling for comedy. It’s only God-given. I appreciate it, man.”

The special performance kicks off the celebration of the 2012 Ford Hoodie Awards Weekend: August 2-5, 2012 in Las Vegas as he wraps his final comedy tour, capping off an esteemed stand-up career filling stages with an up-close and personal dose of laughter that leaves fans screaming for more. From stage to screen, Harvey shares laughs and signature entertainment as a radio host of “The Steve Harvey Morning Show,” best-selling author behind the movie “Think Like A Man,” (which premieres August 28 on cable’s Movies On Demand), host of Family Feud and upcoming new daytime show Steve Harvey.

Steve Harvey says, “The road to this final show has been an amazing journey doing stand-up for the past 27 years, and I can’t thank fans enough after reflecting on all those years on stage, and the unforgettable moments and jokes we’ve shared. It’s been a wild ride over these years on stage, radio, TV and more, and taking the stage for my final show, I will have a special blowout performance in store for everyone in Las Vegas and watching at home that will be bigger than any show I’ve done so far.”

The program is $19.95 (SRP**) for the PPV live show and replays as well as the VOD. The show’s rating is TV-PG (L). The following providers will be carrying this seminal event via PPV: Comcast, Time Warner Cable, Cox Communications, Charter, Cablevision, Bright House Networks, Bresnan Communications, Verizon, RCN, Metrocast, and other independent systems.

Where to locate the show on cable systems:

The live Aug. 2 event is on iN1 (SD) and HDPPV (HD). The PPV replays can be found on cable systems at various times on the following channels: iN1, iN3 or HDPPV. For more info and upcoming schedules of the PPV replays, go to: http://www.indemand.com/product/view/319543.

The show will be on VOD on most U.S. cable systems from Aug 3-29 (Comcast will air it until Sept.17). Available in both HD* and SD. Several systems have created a Steve Harvey “folder” with the special and the FOD content. The VOD airings can be ordered at your convenience and have full DVD functionality including pause, rewind, fast-forward and rewind to play again within a 24-48 hour period (varies by cable system). Please see below for where to find the VOD content on various systems around the country***.

Five short features are now playing on FOD on most cable systems that will give fans good insight into what makes this great entertainer tick. They each include an up-close interview with Mr. Harvey and rare clips from famous routines from throughout his stand-up career. Interview topics include defining moments in his career, his humble beginnings, what it is like the first moments on stage, and who he thinks are the true “Kings of Comedy.” Viewers can find these assets by checking their Video On Demand (VOD) menus under Events on Demand, Free Previews, Special Events or Free Extras. (Locations differ by system.)

*High definition not available in all areas

***Note: Cable systems may have the content in one or more locations within their On Demand menus.  Customers should go to the On Demand location on their channel lineup and select one of the following folders to access the special: