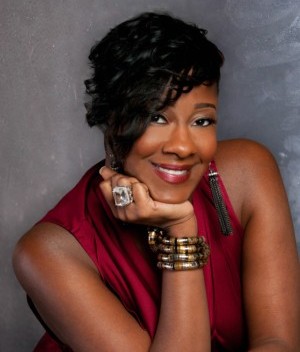 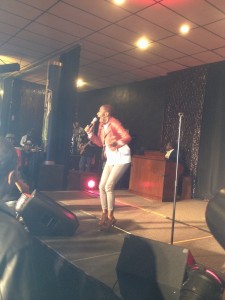 Out On A Limb Productions and Yesha Ministries was transformed last night from a simple concert to a night of worship, praise and transparency as Le’Andria Johnson revealed to the Philadelphia crowd that she is indeed pregnant.

Johnson, who is not married, was in the city of brotherly love for a make up concert and the place was packed as fans waited in anticipation to see Le’Andria Johnson sing in her first ever Philly performance. Opening acts included Tamika Patton, Mark Collier, Marc Britt, Zak Williams and 1/Akord and others. Praise 103.9’s, Desi was a great host as usual and kept the crowd laughing all night long in between acts.

Once Le’Andria hit the stage, complete with band and background singers, she immediately went into the Byron Cage hit “I Will Bless The Lord” and then VaShawn Mitchell’s “My Worship Is For Real”. Would you believe that was the next to the last song? In the midst of her singing she began to testify and said “I messed up but God didn’t forget about me”. She even apologized to all of her fans who she may have disappointed and said I’m sorry, I made a mistake and I fell.” “Single women, if you can wait on God…wait”, she went on to sing.

After her testimony, the place went into a praise and many women were crying and praising God as if they could relate. Le’Andria went on to say that she does not condone what she did and she did not know whether or not her label was going to drop her because of her mistake. “I’m not afraid…how can a soldier be afraid?”, she went on to say.

Towards the close of the concert, Le’Andria and Company, going along with the atmosphere, went into the Clark Sisters, “Hallelujah” and she literally ran around the entire venue (bare foot of course) and danced, sang and praised God. As the night drew to a close Le’Andria summoned one of the concert goers to come up to the stage and read the entire chapter of Luke 22 and as she began to cry, the pastor of Yesha Ministries, Bishop James D. Robinson began to pray for her unborn child and prophesied to her that “People will be healed by the sound of your voice.” Desi came back on the stage with tears in her eyes and said that Le’Andria was her when she got pregnant with her daughter 13 years prior. She went on to say “The church is so judgmental and many babies were terminated because of embarrassment but not anymore under my watch.”

Although Le’Andria did not sing any original material from her albums, the night ended up being a night of healing and deliverance. You can say what you want about Le’Andria Johnson but one thing you can never say is that she is fake. She is as transparent as they come and I think that is what gospel music needs in this day and time. Of course, the coming months will be tough for her and her ministry but we must continue to pray for restoration and most of all her unborn child.

What are your thoughts? Do you think Le’Andria should sit down until her baby is born? Sound Off!