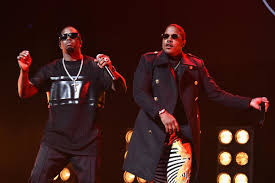 The Pre-GRAMMY Gala, hosted by The Recording Academy and legendary executive Clive Davis, is one of music’s most celebrated and coveted industry events of the entire year. Everyone from Billy Porter to Nancy Pelosi was in attendance.

After a tribute by former Bad Boy artists that included Faith Evans and Ma$e, Diddy gave a 40 minute speech pretty much scolding the GRAMMY® committee about their lack of diversity and respect for Black music, and although his protege Ma$e had no problem honoring his former boss just six days ago, he dished out the same type of scolding that Diddy dished to the GRAMMY committee regarding Diddy holding his publishing hostage and more! See his @rsvpmase Instagram post below: