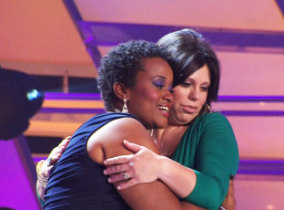 Last night’s episode of Sunday Best was indeed a shocker and had Twitter and Facebook on fire! From the start, eyebrows were raised with the selection of Broadway songs that the final three contestants had to sing. Now, I am all for versatility and I am not trying to be deep, but if the show is called Sunday Best wouldn’t it make more sense to tackle a song from Mahalia Jackson then it would a song by Rodgers and Hammerstein? Naturally, I get that it is all about ratings but I think that the “unchurch” would appreciate it more if Sunday Best was more true to the name and represent what we do on Sunday. Anything other than, can be seen on American Idol.

With that being said, after belting out two songs a piece, the Sunday Best finalists are again down to two women. Now, I am not saying that a man should be in the finale as some sort of pity party but Michael Pugh from Brooklyn, NY was one of the better singers in this year’s competition and he was sent home packing. We all know that Amber Bullock is one of the most skilled singers that the Sunday Best franchise has ever seen and will go far, but is Andrea Helms really a Sunday Best contender? Andrea does have a beautiful and angelic voice and she is an anointed singer but Sunday’s Best?

One thing is for sure, Andrea Helms is set to be the next Amy Grant or Martha Munizzi of the gospel music industry and will sell more records than any previous winner of Sunday Best and she may even beat Amber Bullock for the coveted title of Sunday Best. My question is….will there ever be a male Sunday Best winner?

Who is your pick for Sunday’s Best?