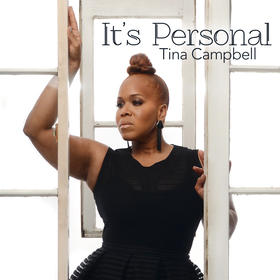 BOOK ENTITLED “I NEED A DAY TO PRAY” NOW AVAILABLE 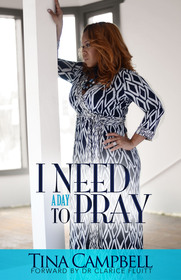 The highly anticipated solo debut album from Grammy® Award winning gospel singer, songwriter and WE tv original series star Tina Campbell, “It’s Personal,” has finally arrived! After a short and unforeseen delay, the album was officially released on May 21st on iTunes. Fans were overjoyed upon hearing about the release and the album shot to #5 in the country and landing at #1 on the Gospel chart immediately upon release.  And, topped the Amazon R&B and Soul charts.

Tina took to Instagram to thank her fans. “Out for 5 days, only on one digital outlet so far, released independently, missed release date by 2 weeks with no explanation & no real release date, surprise post of its sudden release sparked fans, now It’s Personal is #1 in gospel and #47 overall in the country. NOT SO BAD! Singing…I’m following Jesus everyday to reach my Destiny. Thank you, Jesus & Thanks, fans”She wrote.

The record is the first released from Gee Tree Creative, the company Tina and her husband, Teddy, recently started.  Teddy posted on Instagram about his excitement, saying,

“I’m SUPER EXCITED about this album for a number of reasons…Just like David wrote almost the whole book of Psalm out of his heart for God, this album was birthed out of a place of pain, joy, worship, praise, deliverance, and healing.”

The album, features the current single“Destiny,” which Tina debuted for an eager crowd at the premiere event for the fourth season of Mary Mary’s hit self-titled WE tv show. The singer also performed “Destiny” to a captivated Good Morning America audience earlier this year. Showcasing Tina’s powerhouse vocals, “Destiny” is an inspirational song that reflects the singer’s journey and serves as a beautiful testimony to how far she’s come. Other tracks on the album include the spiritual “Only Jesus Did it” and the uptempo “Life.”  The smooth duet “Love Love Love”features the incomparable Stevie Wonder. “It’s Personal” is available on iTunes and Amazon.

Earlier this month, Tina debuted as an author with her book “I Need A Day To Pray.”  As documented on the third season of “Mary Mary,” the singer/songwriter, wife, and mother of five faced some of life’s most overwhelming challenges. She credits her faith as one of the reasons she was able to overcome them. Through it all, Tina put some of her feelings and ideas into a journal which became the book.  Both the book and the album will come together when Tina presents her new stage performance “An Evening With Tina Campbell.” The event, which will now take place on June 13th, will allow Tina to share her faith and story in a different and more intimate way.

As part of Mary Mary, Tina has won numerous awards and accolades including four Grammy® Awards. She and sister, Erica Campbell, have sold over 5 million records as Mary Mary and continue to perform around the globe. Season four of WE tv’s “Mary Mary” garnered the number one slot upon its premiere in March and continues to grow in popularity.