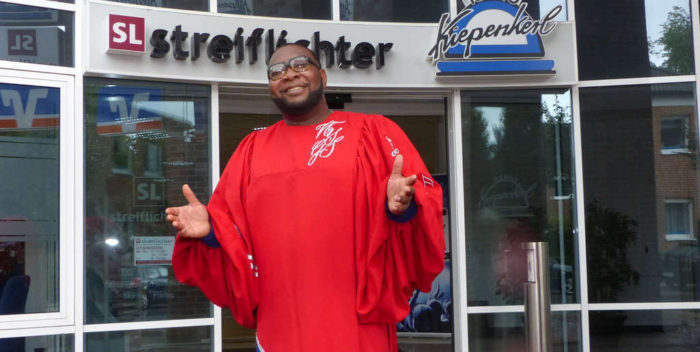 July 13, 2010
By Thomas Warren
The New York Gospel Stars debuted at the New World Stages Theatre last night to a near packed house. The show’s producers Craig Wiggins and Elijah Wells were excited to bring the International Music Revue home to New York after delivering more than 85 shows abroad. And New York City was happy to receive them!
The show opened with a medley of gospel classics and went full throttle thereafter. Songs like “View That Holy City“, “When the Saints Go Marching In” and “I Wanna Know What Love Is” were delivered with the highest energy and charisma. One of the crowd favorites of the evening was “The Blessing is On You” made famous by Donald Lawrence and Co. By the time this song’s reprise was done, the house was on their feet in cheer and praise.
The cast was not disappointing in any way. Their energy and showmanship were accents to the musical repertoire. With stylings typical of gospel, the musical arrangements were packed with ‘call and response’ choruses and soaring vocals. Every lead vocalist showed skill and prowess, remaining poised throughout the entire performance. Not to be outdone in his own production, Craig Wiggins amazed his audience with his vocal range and powerful delivery. This New York Star has been one to watch for many years since his work with Bishop Hezekiah Walker and The Love Fellowship Choir on songs like “I‘ve Got a Reason“ and “It‘s More Than That“. Wiggins was also one of the stars of “Mama, I Want to Sing!”, a Vy Higgenson production.
When asked why he decided to bring the review to New York City, Wiggins stated, “Other countries and cultures get to experience this particular show and this time we wanted to do something of this caliber in New York City. Not to mention, the area where we are doing the show (Theatre District) is a perfect fit. I wanted to bring a variety of gospel music that everyone could enjoy, but definitely not a watered down gospel. I think we succeeded.”
This show was both entertaining and encouraging. I can certainly see it finding a permanent space in New York City and when it does, be sure to witness this delight for yourself. Kudos to Mr. Wiggins and Mr. Wells. Job well done!!!