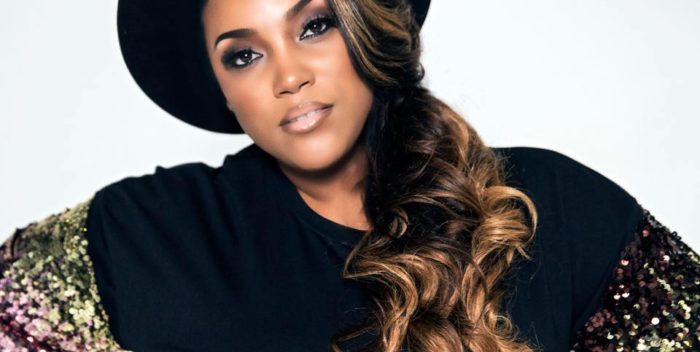 Tasha Page-Lockhart was a star varsity player for the Oak Park High School women’s basketball team.  College coaches and scouts came to watch her workouts.  She dreamed about earning a four-year athletic scholarship and going all the way to the WNBA.  Then she got pregnant.  Frequently ill from the pregnancy, she dropped out of high school.  The dream of a college scholarship faded.  The dream of the WNBA faded.

But Tasha is as much a warrior in life as she was on the basketball court.  With God’s help, she has triumphed over many difficulties to become a professional stylist, author, motivational speaker, wife, mother, and leading lady in gospel music.  The Sunday Best champion and Stellar Award-winning singer has not looked back.

Born in Detroit, Tasha was immersed in gospel music from infancy.  Her mother, Lisa Page Brooks, is a founding member of the female gospel group Witness.  Her stepfather is Bishop Michael Brooks of the GRAMMY®-nominated male gospel group Commissioned.  Not only are they Tasha’s biggest music influences, but Michael Brooks also gave seven-year-old Tasha her first professional recording experience singing the jingle for a United Way commercial.

Despite her musical pedigree, Tasha did not want to sing professionally.  Her hopes were pinned on a basketball career, although she admits to hedging her bets by singing in the high school choir “so in case I didn’t get an athletic scholarship, I could work on a music scholarship.”  Nevertheless, seeing her WNBA dream wash away “sent me into a real bad depression,” Tasha says.  She used drugs to calm her despair.  The drug abuse persisted even after she joined Witness, singing alongside her mother on the group’s 2003 album, An Appointed Time.

After getting married, although Tasha was becoming an accomplished hair and makeup artist, she maintained her artistic edge by touring with plays and singing here and there.  In the midst of auditioning for Motown: the Musical, she received a call from a family friend encouraging her to audition for Season 6 of BET Sunday Best.  She said no initially.  “I had this big thing about Christians competing in gospel music.”  But when a cousin called her thirty minutes later about Sunday Best, unaware she had just been contacted by someone else, she “took that as a sign that I should do it.”

Tasha never figured on winning Sunday Best.  She actually kept hoping to be sent home.  “My pastor passed away the day I went to sing on the show,” she says.  “I missed the funeral.  I was grieving by myself.  I wanted to be with my family.  I really didn’t want to be there.  We were struggling badly at the time.  My husband Cliff was working, but one income for a four-family household wasn’t enough.  Then he was attacked at gunpoint and needed reconstructive surgery done on his mouth.  We were homeless, moving from hotel to hotel, living in our cars, sleeping at friends’ houses and my father-in-law’s attic.”

Meanwhile, millions of Sunday Best viewers were cheering for her.  “It was tough trying to keep my cool,” she reflects.  “I’m on the phone calling in, saying to my fans ‘thank you so much for your vote, I appreciate you guys,’ and then putting my phone down and thinking, ‘I only have ten dollars and I’ve got to feed my boys.  Guess I don’t eat today.’”

Another reward was a recording contract with Kirk Franklin’s Fo Yo Soul label.  Recording her debut album Here Right Now, she shares, “Kirk and I sat on the phone and talked about what we had been through.  We had some similarities in our childhoods, and he started writing some of the material for the record.  He put my story into lyrics.”  The hit album earned Tasha a Stellar Award for New Artist of the Year in 2015.

Tasha Page-Lockhart’s journey continues with the release of her sophomore album, The Beautiful Project.  The album, on Fo Yo Soul Recordings / RCA Inspiration, blends Tasha’s passion for hair, makeup, and music with her philosophy and life experiences, which she recently published in book form as And the Winner Is: Tasha Page-Lockhart Uncut.  The album not only features her songwriting and producing talents, but also benefits from a talented team of songwriters, producers, and musicians.  Executive producers are Kirk Franklin, Ronald Hill, and Phil Thornton.

Tasha describes the album’s sound as more mature and peppered with a mix of styles.  “There’s a funky beat here and there, and other familiar sounds, but also a youthful feel.  There’s even a vintage church feel.  But the common denominator is that you can make it.  It’s not the end.”  She adds: “I don’t want to make music that makes you feel bad for the things you did.  The Bible says we’ve all fallen short of his grace.  I want to make music that makes people want to change their ways and feel encouraged at the same time.  The Beautiful Project, and especially the song ‘Beautiful,’ should inspire not just women, but all people, that you are beautiful inside and out.”

The lead single “Over & Over,” was brought to her at the last minute.  “We were wrapping up the project,” she explains, “when [co- producer] Myron Butler ran in the studio and told Kirk and me that we had to hear this song right now.  When Kirk heard it, he was like ‘That’s the single.’”  Billboard-charting artist Bryan Popin also appears on “Beautiful Savior.”  “Bryan and I connected immediately,” Tasha says.  “He has a very fun sense of humor!  ‘Beautiful Savior’ is on his new album and on mine.”

Ultimately, The Beautiful Project is a family affair.  It reunites Tasha with her mother for “Just What He Said He Would Do.”  Tasha explains: “I did a duet on her last record and she did a duet with me on Here Right Now.  I wanted to feature her in a different way this time, so she did all the background vocals.”  Husband Cliff contributes keyboards in addition to co-producing the album.  “This is something we’ve dreamed about doing,” Tasha says.  “It’s been an amazing journey finding our sound together.”  The children, now ages 16 and 8—also love The Beautiful Project.  “I try out all my songs on them.  If they start bobbing their heads and dancing around, me and my husband look at each other and say, ‘yeah, we got one!’”