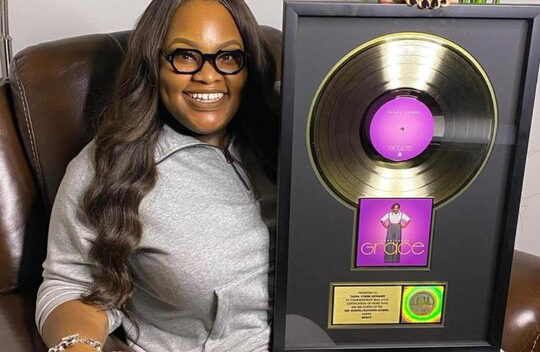 (Nashville, TN) October 6, 2020 –GRAMMY®-winning artist/songwriter Tasha Cobbs Leonard has debuted at No. 1 on Billboard’s Top Gospel Albums chart with her newest album, Royalty: Live at The Ryman. The acclaimed new project, accompanied by striking live performance videos, is already being called the singer’s most vulnerable and mature recording to date. Last night, executives from Motown Gospel also surprised Tasha with news that her debut album, Grace, had been certified Gold by the RIAA®, having sold over 500,000 album equivalents. Released in 2013, Grace is a fan favorite, yielding hits such as “For Your Glory,” and the career-launching “Break Every Chain,” which earned a GRAMMY® and was certified Platinum (with over 1 million song equivalents) last year.

Recorded before “an audience of One”, Royalty: Live at the Ryman features standout hits “Pour It Out” and “Release The Sound,” as well as the lead single, “In Spite of Me.” Guest artists on the project include longtime friend and collaborator Kierra Sheard as well as popular family band We The Kingdom. Throughout the 17-track project, Tasha merges her country, bluegrass and gospel music roots to present an authentic worship experience. Fans can continue to head over to Tasha’s virtual merch table and grab exclusive Royalty merchandise, including the new digital album, an acid wash Royalty t-shirt, and a limited-edition Hatch Show Print poster to commemorate Tasha’s historic recording at The Ryman. Shop for exclusive Royalty merchandise at  www.royaltymerchtable.com.