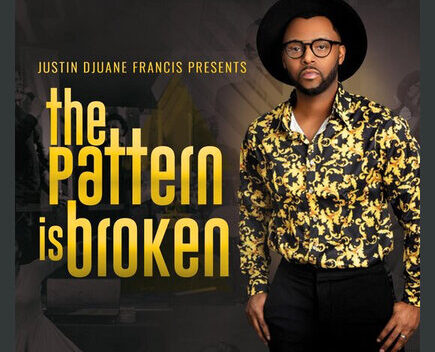 DEBUT PROJECT TO BE RELEASED ON NEWLY FORMED SOAR RECORDS

FRANCIS ALSO GEARING UP FOR THE 2022 SOAR AWARDS IN HOMETOWN OF ROCKFORD, ILLINOIS

February 28, 2022 (Rockford, IL) — At just 33 years old, Justin Djuane Francis has already made an indelible mark on the gospel music industry. As CEO and Founder of Soar Radio, a 24/7 online radio station that features local and national inspirational and  gospel talk and music, Francis has twice won the coveted Stellar Award for Internet Radio Station of the year.

On March 18th, Francis may be looking for more “Stellar” recognition, at the release of his debut project entitled, “The Pattern is Broken” (MNRK Nashville, Indie Blu, Soar Records). The project is a blend of anointed ballads, high worship and pentecostal praise. In fact, Francis singlehandedly wrote 90% the project, as he has also previously penned songs for the likes of L. Spenser Smith, Virtue, Joshua’s Troop, Earnest Pugh, Amber Bullock, Darwin Hobbs and many more.

Songs like “I’m in Awe of You,” “Mercy,” and the title track, The Pattern is Broken,” has set this project up to be one of the big contenders in 2022.

Justin Djuane Francis is Senior Pastor of Soar Assembly, which he founded in 2018 with his wife, Rebecca. Justin started writing music at age 13, and have gained over 10 major placements, including two top 30 radio hits. He has produced various conferences and events, including the nationally televised Soar Awards, which aired  on The Word Network and was syndicated over the country. In 2014, Justin launched Soar Radio, which became the first Gospel Internet BDS Monitored station. Soar Radio has won two Stellar Awards and has become a staple in the gospel community.

In 2021, Justin launched Soar Records and “The Pattern is Broken” is the inaugural project from said label.

The Pattern is Broken will be available on all digital outlets on Friday, March 18, 2022.