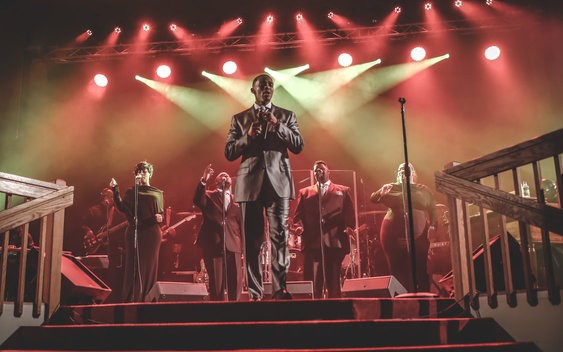 (MILWAUKEE, WI) – Since Root Magazine started five years ago, I have been on hundreds of assignments but this one was different because I had never been to Milwaukee and other than cheese, I really didn’t know what to expect (Smile). From the moment I landed in Milwaukee, the hospitality was top notch. I was greeted by two pleasant young ladies who led me to a chartered mini bus that read “Unity Gospel House of Prayer” and I was given a beautiful gift bag with a bunch of goodies. How cool is that?

Upon arriving at Unity Gospel House of Prayer, the parking lot was packed with church members, gospel music enthusiasts and fans of Pastor Marlon Lock. Yes Lord Radio was on hand to stream the concert LIVE and facilitate interviews with notable gospel music executives and taste makers such as Mike Chandler from Rejoice Radio, Dennis Cole from Chicago GAG and Roderick Jemison from Central South, just to name a few. Clad in an all grey tuxedo, Pastor Marlon Lock was ready to hit the stage but not before his special guests were to grace the audience of over 1,000 with some amazing praise and worship.

Milwaukee natives AM:PM ushered in the presence of God with a modern twist on the classic, “To God Be The Glory,’ that would make Andrae Crouch proud. They followed that with an original song entitled “God Of My Salvation,’ that was clearly a crowd favorite. this group was the real deal!

GRAMMY® nominee, Ms. Anita Wilson, whose sophomore album “Vintage Worship” hit stores in June, debuted her new single “What He’s Done For Me,” a great follow up to from her critically acclaimed pair of singles, “Speechless” and “Jesus Will,” which she ended off her set with.

Bishop RL Burt introduced the man of the hour, Pastor Marlon Lock, who if I didn’t know any better I would have thought he was Michael Jackson the way the crowd erupted in applause. This cool, calm and charismatic “Grandson of a Preacher Man,” was ready to minister the songs that was birthed some 20 years ago. Lock started things off with a funk infused song entitled “I Can’t Help But Praise Him”  that had interpolations of the late O’Landa Draper “I’ve Got A Reason.” After only one song in, it was clear that Pastor Marlon Lock was made for this, as he breezed through the first five or six songs without interruption or pause. Lock, his band and amazing background singers really shined bright on songs like “Hear My Prayer,” “I Need You To Hold My Hand,” and “He Delivered Me.” However, the reggae infused “Lifeline of Love,” “The Lord’s Been Good To Me” and the title track “Good Seed” are the songs that really resonated with himself and with the audience. 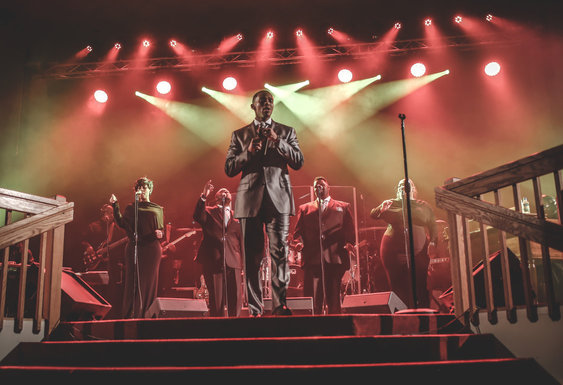 Pastor Marlon Lock in his element at his “Good Seed Project” album release.

Ever the family man, Lock serenaded his wife with the Sam Cook classic “Bring It On Home To Me” before swiftly changing the lyrics to “Bring It On Home To Jesus.” Lock even managed to pay homage to some of his influences like Lee Williams and Harvey Watkins on songs like “I Refuse” and “The Robin.” Before the concert came to a close, we were told to focus our attention on the monitors and was met by Lock’s alter ego, Aunt Betty. Let’s just say if this music thing does not work out, Pastor Marlon Lock will have a great career as Madea’s trusted sidekick! After a quick wardrobe change into a crisp all white suit, Lock ended the nearly two hour set with “Home,” a heartfelt song about Heaven and some special people he would like to see when he gets there. 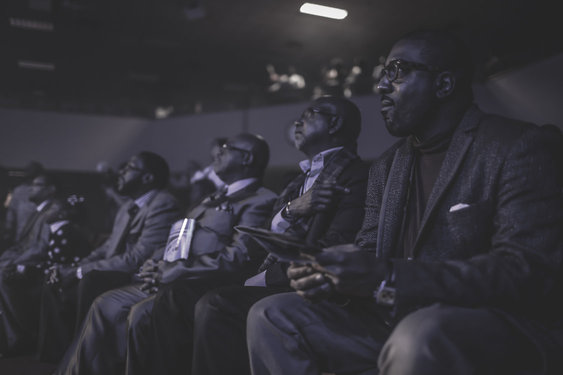 Typically when you go to recordings or concerts, more often than not you feel a bit drained, however, this was different because Pastor Marlon Lock has the uncanny ability to bring you into his world through song and that is very rare for an artist. Quite honestly, his music does not match his youthfulness or his personality, as it is more of a quartet sound than the contemporary sound that we hear everyday. However, that is what will set him apart from the rest and put him on a fast track to success and worldwide ministry. 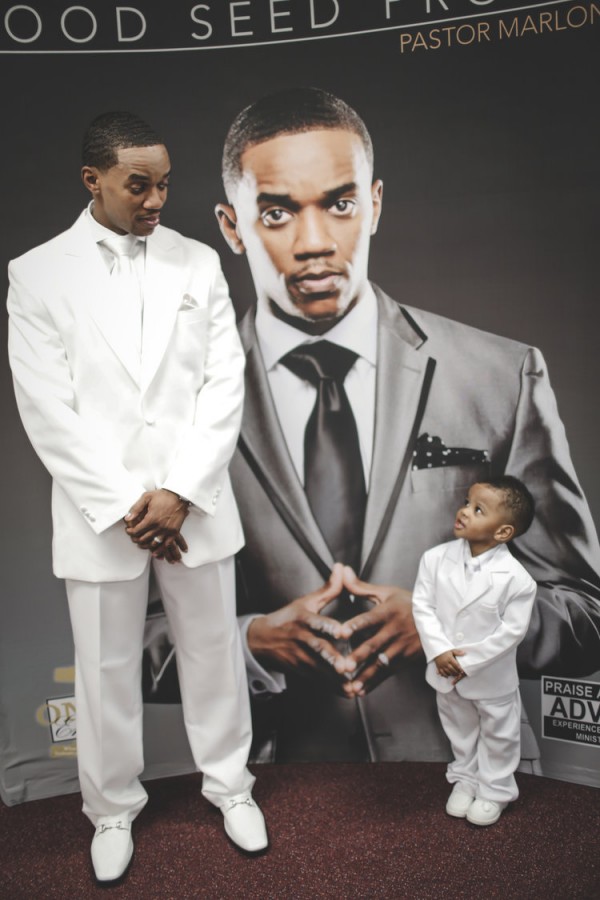 Check our our post concert interview with Pastor Marlon Lock:

Root: Root Magazine, here with Pastor Marlon Lock. Yesterday I didn’t know too much about you. Now today, I feel like I know your whole life story. Between you and Aunt Betty (LOL)… Your ministry is amazing and I thoroughly enjoyed this release concert. You have an old school, quartet vibe going on and I love that. You’re a young man, but you kind of flipped it. In my mind, I’m thinking, “This guy is like the R. Kelly of Gospel.” Tell us a bit about your ministry and who writes your music?

Pastor Marlon Lock: OK… Well actually, first I always like to give thanks to God. I thank Him for giving me the ability to do what I do. I actually wrote all the songs on the album.

Pastor Marlon Lock: Yeah… It’s good to write your own material, because I can really sing it how it’s supposed to be sung. I am a Pastor that happens to sing, so, my music is real ministry. This has been an incredible journey. It humbles me for songs that I wrote seventeen/ eighteen (17/18) years ago. Like the song, “Good Seed.” When I wrote the song, I wasn’t. I was crying out, because I wanted to be; and now to be able to say I’m really living holy you know living for God. Man, I’m faithful to my wife. If I hadn’t been delivered, I couldn’t be faithful to my wife. That’s just reality. I don’t know how many pastors would say that. The reality is when you’re tried; when you’re tested you can resist that temptation. It makes it all worth it man. So, I wouldn’t change having the peace of God and living holy for anything in the world.

Root: Now, where do you get you since of inspiration as far as songwriting? Because, you have the old school vibe going on. You know, we’re in a world today where everything is contemporary. Nobody digs back in the day. But, you as a young man, you kind of dug back a little bit.

Pastor Marlon Lock. My dad was in prison while I was growing up. When he got out of prison, he ended up overdosing on heroin. My mom couldn’t take care of my brothers and me effectively. At fifteen (15) months my grandparents took me in. So, I’m around much older people all my life. I’ve listened to The Jackson Southernaires, The Mighty Clouds of Joy, and The Williams Brothers. I listen to Marvin Gaye, Sam Cooke, Otis Redding, you know? I was that kid that went to a party and I ain’t know what music they were playing because I was used to listening to “Sitting on the Dock of the Bay. I think by my grandparents being so much older while raising me, it just influenced me. My granddad, he honestly kept me from a lot of things growing up even in the church; because he said, “You know son, the church has changed from saving souls to really just trying to make money.” Now we understand that it takes money to make the lights be on and water run, we understand that. But, whenever you start manipulating people and you try to put a “God tag” with it, it’s just not cool. There are some people that are really just hungry and thirsting after salvation. They have a lot going on and a lot of issues. When I come to church, the last thing I need to hear is how much can I give. How much can you give me, because I’m sick in sin and church is supposed to be a hospital. So again, hopefully this project can just really minister to people and let them know you really can change. If God can do it for me, He can do it for anybody!

Root: You are Pastor, but you also sing. I can imagine with this project, I think it’s going to do well for you. You’re going to be traveling and stuff like that. How do you balance the two?

Pastor Marlon Lock: One thing I do, every morning when I get up, I say “Lord, I need you to order my steps today.” Because I really don’t know where I need to go. I don’t know where I should go but I need my steps to be ordered. I ask God to give me balance. I have a great support system; not just in my wife and family, but in my church family. I got some really, really good leaders that got the same heart for God’s people like I have and that’s important. Like my Elder, he’s been here… I’m young so a lot of the members are older than me. So they knew me growing up. My Elder was here since he was eight (8) years old. Our first member, her last name is Nadine Glove, but she was Nadine Arnold 41 years ago when she joined and their family still goes here. So you know again, continue to try to be humble and continue to be led by the spirit. I called TT (Tammy Taylor) my publicist, and I told her whatever door God opens, I want to run through them. I don’t want to walk through it. I want to run through it. So if this is the season God wants to raise me up in Music ministry and helping people change their lives, I’m for it.

Root: What are your expectations on this “Good Seed Project?”

Pastor Marlon Lock: I want God to surpass any of my thoughts in regards to what this project can do. So, if I thought about going Platinum, I want it to go Double Platinum. Whatever He wants to give. Even if it is one soul, the Bibles say’s that “the angels rejoice over one soul that gives their life to the Lord”. So, if one person says “Yeah Pastor Lock… I listen to “Good Seed” or I came to one of your shows and you really ministered to me and I want to be saved.” You know what, it was all worth it.

Purchase Good Seed on iTunes or wherever gospel music is sold.