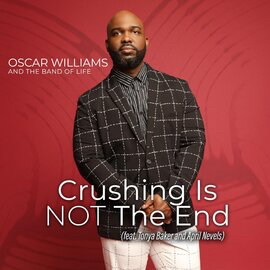 SINGER AND SONGWRITER OSCAR WILLIAMS CELEBRATES HIS BIRTHDAY WITH THE RELEASE OF HIS NEW  SINGLE, “CRUSHING IS NOT THE END”

JANUARY 13, 2022 (DALLAS, TX) — Singer, Musician and Songwriter, Oscar Williams, has so much to celebrate. Not only is today (January 13th) his birthday, it is also the release of the sophomore single from his debut EP, Speak Life, Volume 1, entitled “Crushing Is Not The End.”

The song features two of today’s most dynamic voices, Tonya Baker and April Nevels and boasts prolific lyrics, “If you’re in a storm, you can make it, you get knocked down, get back up again, you may have heartache and some pain waiting for the sun to erase the rain and you want to know, does it get better from here.”

“Crushing Is Not The End was inspired by my pastor, Bishop TD Jakes and a book he wrote called Crushing. I wrote this song to remind people that there is life after tragedy, hope after heartache, purpose out of pain..if you hold on you will learn that  crushing is not the end,” says Williams.

His debut EP, Speak Life, Volume 1, was released at this same time last year and Crushing Is Not The End was one of the standout tracks. In addition to contributing 100% of the writing on his debut EP, Williams is also responsible for penning songs for Grammy® winning artists Tamela Mann, Smokie Norful, Karen Clark-Sheard and others.

Crushing Is Not The End is available on all streaming platforms: https://music.apple.com/us/album/crushing-is-not-the-end-feat-april-nevels-tonya-baker/1604090352?i=1604090353

Ordained Elder, Entrepreneur, Producer, Artist, Writer, Public Speaker, Musician, Composer, Teacher and a born Leader – these are but a few adjectives that describe the multi-faceted Oscar Williams, Jr. Born and raised in St. Louis, MO, Oscar began his formal music training at the age of eight. He completed his undergraduate studies at University of Missouri-St. Louis, receiving a Bachelor of Arts in Music, with an emphasis in piano. He later obtained a Masters of Music degree in Music Composition at Southern Methodist University and a Doctorate degree in Educational Leadership and Management at Dallas Baptist University, maintaining a 4.0 G.P.A.

Oscar’s professional career spans over two decades, touring the world and serving the United States department as a Music Ambassador in collaboration with programs such as: Rhythm Road and American Music Abroad. These responsibilities require him to tour several times a year with the assistance of government contracts and U.S. Embassy’s around the world promoting American music values and culture. In 2014, Oscar started Speak Life, LLC – a global music, leadership and production company that specializes in creating avenues of positive communication through music. The “Speak Life Tour” was created to influence the way people communicate around the world. Some countries to host the tour have been: Chile, Argentina, Haiti, Venezuela, Brazil, Prague, Italy, Germany, Switzerland. In 2016, Oscar established the Speak Life Academy of Arts and Music, INC., a 501 (c)(3) company formed to hold a charter for the future Speak Life Academy of Arts and Music Charter School in Dallas, TX.

Oscar’s recording career began in 2004 with his debut release, “Unstoppable,” on the Warner Bros. label. This record produced chart topping hits such as “Safety,” “You Mean The World To Me” and “You Are The One.”