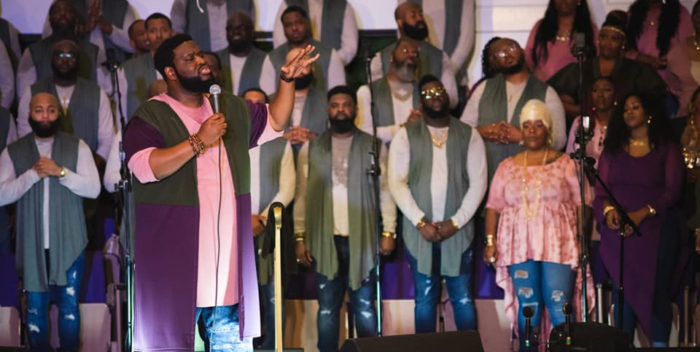 After an introduction from Hezekiah Walker, Kevin Lemons & Higher Calling took their places dressed in green, purple, or pink with denim. The choir’s first selection was an arrangement of  Donnie McClurkin’s “Draw Me Close” in true “Higher Calling” fashion. This praise and worship song truly set the atmosphere for the evening.  The choir then went into their second selection of the night called  “All The Glory Belongs To God”, penned by BMI Award Winner & Stellar award nominee Jason Clayborn. Higher Calling  brought energy, great sound, and movement that had everyone on their feet. The ending of the song featured a clever, music sample from the late Tupac Shakur’s “Changes” as Kevin sung “…that’s just the way it is…”

One thing about Kevin Lemons & Higher Calling is that they also pay homage to traditional gospel music from the eras of James Cleveland and Thomas Winfield. “Proclaim His Name” brought forth a quartet,  80s sound and contemporary vibe all mixed into one. This song was led by Corey Prather, founder of Corey Prather and HiPraize out of Tennessee. This guy sang until the power fell. Kevin then grabbed the mic and said “We gotta use the old power in order to have new church!” This track will definitely be many choir lover’s favorite from Higher Calling’s forthcoming album.
Kevin Lemons & Higher Calling recorded over 12 songs during their recording, which included lead vocals from the amazing LeJuene Thompson, Darius Paulk, C. Ashely Brown-Lawrence, and the anointed Travis Malloy.
A very special guest in the audience was award winning gospel artist Donald Lawrence, who is Kevin Lemon’s Mentor. Lawrence surprised Kevin Lemons & Higher Calling for their recording. Other special guests included the choir master himself Professor James Hall, Amber Bullock, Patrick Riddick, D. Corey Shipley, Zak Williams,  and Michelle Prather of Kurt Carr & The Kurt Carr Singers.
Kevin Lemons & Higher Calling’s 3rd Round Live Recording was nothing short of amazing! From beginning to end, the song choices (multigenerational), the skill, the sound, the message and most of all the presence of God was phenomenal! Long Live The Choir!