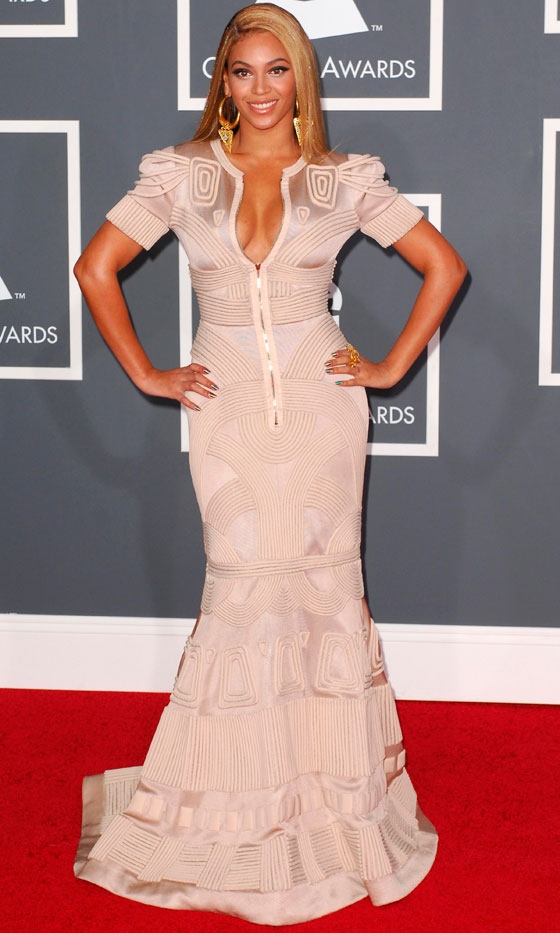 OK… so the Grammy’s was last night and overall I think it was a pretty good show. It was a big night for Beyonce (who won 6 Grammys- most of any female artist), Taylor Swift, Lady GaGa and Maxwell. Beyonce’s riveting performance of “If I Were a Boy”  had the crowd on their feet, including her husband Jay-Z, whom she publicly thanked as her husband for the first time in a public forum. Did Jay look uncomfortable or what? The Black Eyed Peas stole the show with their performance of  “Gotta Feeling” and Lady Gaga and Elton John was also a big surprise for the Grammy crowd. Taylor Swift and Stevie Nicks also performed but I did not see the big deal as Taylor sounded very average. However, the big highlight of the night was the Michael Jackson tribute from Smokey Robinson, Celine Dion, Usher, Jennifer Hudson and Carrie Underwood. Did you guys have your 3D glasses on? However, the thing that was missing from the show was Gospel music. 2009 was a huge year for gospel music but the gospel community was shut out yet again with no performances or awards given during the telecast. We have to start writing letters to the academy and start boycotting like the rap arstists did in the 90’s!  Since we are a gospel magazine, I would like to congratulate all of the Gospel Grammy Winners! Check out the COMPLETE list of gospel grammy winners below. Winners are in BOLD:

“Jesus Is Love” by Heather Headley feat. Smokie Norful
Track from: Audience Of One

“Wait On The Lord” by Donnie McClurkin feat. Karen Clark Sheard
Track from: We All Are One

Speaking Louder Than Before – Jeremy Camp

The Power Of One – Israel Houghton

The Long Fall Back To Earth – Jars Of Clay

Love Is On The Move – Leeland

The Journey Continues – The Williams Brothers

How I Got Over – Vickie Winans

Audience Of One – Heather Headley

Congrats to all of the nominees and winners! It is truly an honor to be nominated even if you don’t win! To see a full list of winners in all categories go to www.grammy.com