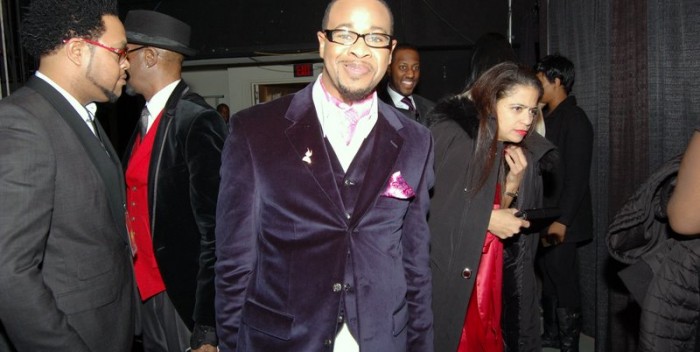 3 years after his smash hit, “Let Go”, DeWayne Woods is back at it again with his 2nd Solo effort. Can he do it the second time around?

Root: Before we get started talking about the new project, I wanna talk a bit about Dewayne Woods in the formative years. Some artists tend to say that they have been singing all of their life. Is that your story?

DeWayne Woods That really is my story. My mother literally gave birth to me after a church service. She went to church, sang a song and then went into the hospital and had me, so I didn’t have any choice but to sing. I was born and raised in Kansas City, Missouri and I come from a musical family, however, I am the only male in my family who sings. Neither my brother nor my dad can sing but all the women can sing. I have always been singing and I really don’t know anything else. I never had a regular 9 to 5 job and singing is what I really love to do. Naturally, I sang with a few local groups across the city but I believe my national exposure came from singing with John P. Kee when he saw me in the play “A Good Man Is Hard To Find”. I actually played one of the principal characters by the name of Buddy and John got a chance to hear me. From there, I sang on the”Show Up” album and later I began singing with Donald Lawrence and Tri-City.

Root: Being from Kansas City, how were you able to get that national exposure when you came from a place that is not necessarily known for music?

DeWayne Woods Believe it or not, Kansas City has produced some of the greatest singers around. I was traveling with a choir called Joy Unlimited and from there we had the opportunity to travel to GMWA and really get a chance to see life outside of Kansas City but when the play came to town, they held auditions and I went and auditioned and they loved me! The crazy thing about is, I was so young at 17 years old and I had to get my mother to sign permission slips and all of that. I actually finished High School while traveling with the production and because I attended a Performing Arts School, I was able to get credits. That’s how I was able to break away from the city.

Root: Many people don’t know that you started your professional music career with the 80’s group, Atlantic Starr. How did that come about?

DeWayne Woods One of the Lewis Brothers from Atlantic Starr heard me sing and loved my voice. David Lewis, who was one of the lead singers behind the songs “Secret Lovers” and “Always”, went into full time ministry so they needed someone to replace him for an upcoming tour. I joined the group and I literally was in Osaka, Japan three weeks later singing with the group. It was a great experience and I actually recorded two projects with them over a three year time period.

Root: How has meeting Donald Lawrence changed your life?

DeWayne Woods Donald’s method of reaching people and mentoring people is so much different from others in the industry. I learned a lot from John P. Kee but Donald really poured into me from a professional level.

Root: Your new album is incredible. What was your method while going in the studio to record this album coming off of such a huge song like “Let Go, Let God”?

DeWayne Woods You never try to reproduce what worked before. God ordained certain things for certain times. I wanted to use the record as another tool to deliver people out of whatever situation they were in. With the last record, “Let Go, Let God” was the song that delivered people from sickness and disease. As I was driving in my car one day, God gave me a concept for this album to give people music for the day. Whatever people are going through during any time of the day, there would be a song for them on this album so that was my thought process going in. That is where we came up with the title: “My Life’s Lyric”. All of the songs are testimonies so I wanted people to not only identify with the music but more so the lyrics.

Root: Who are some of the writers and producers on this new project?

DeWayne Woods I would have been a complete idiot not to have PJ Morton on this project so PJ did three songs on there. Aaron Lindsey and Daniel Witherspoon also produced some songs on there as well. I wanted to branch out a little bit so I called on James Poyser from Philly and he actually produced “Good Times”. I also worked with a new duo out of Chicago who worked with Fred Hammond.

Root: Did Donald Lawrence write any songs on this album?

DeWayne Woods He did not write any songs but he over saw the entire project and nothing could go out unless it was approved by him. He has a tremendous ear so I was totally cool with that.

Root: What are some of your favorite songs on this new project?

DeWayne Woods I would say tracks one through ten! ((Laughter)). I would have to say that all of the songs hold a special place in my heart but one of my favorites is a song called “There Might Be Hope” because the way you hear it is the way I felt it. Donald Lawrence did not really think that particular song should have went on the album but after hearing my heart on the record, he conceded and commended me for following my heart. I love the song “Good Times” just because it is so different.

Root: That is my favorite song! It is so out the box and you was doing some Prince stuff on there!

DeWayne Woods Yeah, that song is different and it really brought out something in me. I did the entire song in falsetto and it just worked. That is actually one of Donald’s favorites as well.

Root: I know that you have a daughter. What is your relationship like with her? How does she feel about Dewayne Woods being her dad?

DeWayne Woods She really gets a kick out of saying Dewayne Woods is her dad. She splits her time between New York and Atlanta. Her mom in in New York and I am in Atlanta. I think it is very important that I spend as much time with her as possible because there are certain times when they need their dad in a different environment from what they are used to. We have a great relationship and she actually used to leave with me but she wanted to come back to New York to complete some courses. She was my date for the Stellar Awards in 2008 and we had a really good time.

Root: What is your take on the Sunday Best phenomenon? Many people say that the judges are too critical of some of the contestants. What’s your take?

DeWayne Woods I think that it is a good platform for up and coming artists because it exposes them to an audience that they would not necessarily reach if they were not on television. As far as the judges being too harsh, I want people to consider that if these people were in the real world, they would be rated based upon the performance of their gift not necessarily what they sing. Gospel is definitely gonna have its place but when you think about a competition, you want people to give you constructive criticism that’s gonna help you grow. You don’t want to sugar coat it and tell everybody that they sound so great and then when they get in front of the record executives, they tell otherwise. At least people in the gospel industry who they looked up to for years can tell them ahead of time so that they know what to expect when they get into the industry.