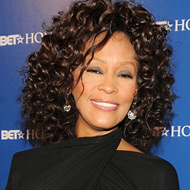 Last night at 9pm, millions of viewers watched as Queen Latifah, Dr. Keith Black,  Dr. Ruth Simmons, Sean “Diddy” Combs & Whitney Houston received BET’s highest honor. The BET Honors was hosted by Gabrielle Union for the second year in a row and it was indeed a great show! Legendary Singer Patti Labelle serenaded Queen Latifah with her classic “If Only You Knew” only as Patti can. Although the song did not quite fit the moment, the performance  was great nonetheless. Newcomer Jazmine Sullivan also serenaded the Queen and dazzled the crowd with an Aretha Franklin classic, “Rock Steady.”  I did not quite get why BET could not just get MC Lyte or another female rapper to do her Grammy winning song U.N.I.T.Y. but that’s just me. The show included other performances by Trey Songs, Stevie Wonder, India Arie and Ryan Leslie who struggled through a song and made me happy that he had a Harvard degree to fall back on.  However, Sean “Diddy” Combs’ tribute was the most touching as he was given his award by his former boss/current employee, Andre Harrell as well as a mini concert by the woman he dubbed “The Queen of Hip-Hop Soul” over 18 years ago, Mary J. Blige.  Diddy’s entire speech honored his mother Janice Combs and the sacrifices she made for him and his sister and it was very heart warming. The night ended with the one and only Whitney Houston being honored by Ne-Yo, Jennifer Hudson and a “new” Kim Burrell, who is 100 lbs lighter and was getting her sexy on 🙂  Kim’s performance was obviosuly a surprise as Whitney jumped out of her seat and  stood at the foot of the stage like Kim’s proud mama as she watched her sing a personalized version of ” I Believe In You and Me”. In my opinion, one of the highlights of the show was J Hud singing “I Will Always Love You”. She hit notes that Whitney could not even dream of hitting now and proved that she is the next Whitney Houston in the making. There are many people who probably disagree as I read many comments on Twitter and Facebook so if you dont agree with me, you are more than welcome to leave a comment. Overall, the show was a success and I love the fact that BET recognizes people like Dr. Keith Black and Dr. Ruth Simmons who are unsung heroes in the African American community. For that alone, we thank you. 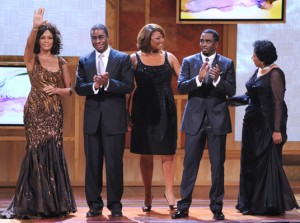