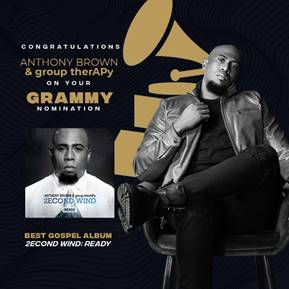 Nashville, TN (November 25, 2020)— Key of A/Tyscot/FairTrade celebrates Anthony Brown and group therAPy’s nomination in the 63rd Annual GRAMMY® Awards. This is Anthony and group therAPy’s second GRAMMY® nomination; “Worth” was nominated for Best Gospel Performance /Song in 2015. During the hour-long live-stream event, Anthony Brown and group theraAPy was announced amongst the nominees for Best Gospel Album for their 2019 release of 2econd Wind: Ready. The album produced the 2019 summer viral anthem “Blessings on Blessings,” and fan-favorite “This Week,” both songs reached number #1 on Billboard’s Gospel Airplay chart. The project also featured appearances from Mary Mary’s Erica Campbell and Hip-Hop artist 1K Phew on “He Always Wins,” and the mesmerizing vocal performance from Kelontae Gavin on the title track “2econd Wind.”

“The Grammys is the highest honor in music, and it is surreal to be recognized for this project. My mother has always told me to just write songs that meet people where they live. I’ve always just wanted my music to reach people and I’m elated that it’s reached someone to the point of Grammy recognition. This is an amazing feeling,” said Anthony Brown.   The 63rd Annual GRAMMY® Awards will air live on CBS on Sunday, January 31, 2021.

About Tyscot RecordsTyscot Records is the oldest operating African American gospel music recording label in the world. The company was founded in 1976 by dentist Dr. Leonard Scott and his late nephew, Craig Tyson, a musician. The Indianapolis-based concern has introduced the world to some of gospel music’s biggest acts ranging from John P. Kee, VaShawn Mitchell and Deitrick Haddon in the early days to new stars such as Anthony Brown & Group therAPy, Casey J, Kelontae Gavin and Bri (Briana Babineaux). Some of the classic songs in the company’s catalogue include John P. Kee’s “Jesus is Real,” Casey J’s “I’m Yours” and Anthony Brown & group therAPy’s “Worth.” For more information, visit https://www.tyscot.com.