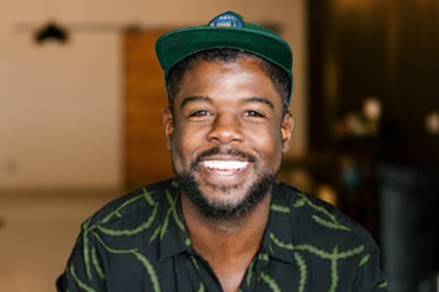 Alvin Love III is on top of the world after his first Grammy win, and what a big win!  Although this is not the songwriter and producer’s first time showcasing his writing skills, this is his debut as a producer overseeing the production details of an entire album.  After years of coaxing his 12 time Grammy award-winning mother, CeCe Winans, to let him spear-head her new project, he finally received the green light.  Love is the visionary behind the generation-bridging new album Let Them Fall in Love that took almost three years to complete.  It was worth the wait because the project recently won two awards, Best Gospel Album and Best Gospel Performance/Song at the 60th Grammy Awards held at Madison Square Garden in New York City.

When receiving the back-to-back awards Love was beyond thrilled saying, “What a night! Thanks to a team of the most talented musicians and engineers, Let Them Fall in Love scored two Grammys. Thank you, Mom. Thank you Jesus!”

Prior to his work on Let Them Fall In Love, Alvin penned the following songs for Winans:  “More” featured on  For Always: The Best of CeCe Winans,

“A Place Like This”, “Purified”, “Colorful World”,  from Purified, “The Coast Is Clear” and  a Co-Producer’s credit on Thy Kingdom Come.  He also composed the mid-tempo tune “Changed My World” on BeBe & CeCe’s Grammy winning release of Still.  The contemporary gospel duo, Mary Mary, featured Love’s “Homecoming Glory” on their fifth studio album Something Big in 2011.

In addition to building his chops working with family and friends, Love took a leap of faith, writing and co-producing his own seven track album released in 2010 entitled, The Strawberry Project.  Music lovers should keep their eyes on Alvin Love III because the best is yet to come!