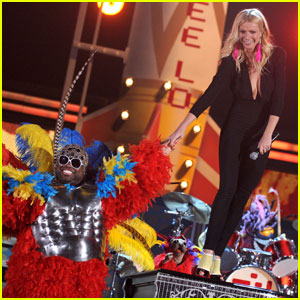 The Grammys: A Blast or a Bust?

Music’s biggest night kicked off at the Staples Center in Los Angeles, California to a sold out crowd of music fans, artists and executives. The 53rd Annual Grammy Awards was the talk of the day as an array of artists was awarded for their contribution to every genre in the music industry. The show before the show- Red Carpet arrivals- was a show within itself with outlandish outfits from music’s biggest artists, Nicki Minaj, Katy Perry, Ciara, Rihanna and even 10 year old pop star, Willow Smith. However the most outlandish of them all, to no surprise, was the always over the top, Lady Gaga who showed up on the red carpet in an egg and in true Gaga fashion, didn’t hatch until her highly anticipated performance of “Born This Way” (which sounded eerily similar to Madonna’s “Express Yourself’), actually fell short according to some critics. 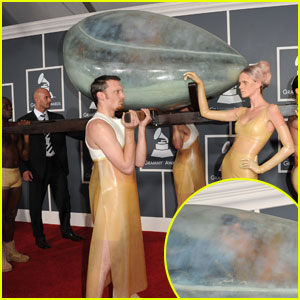 The show started with a touching tribute to the Queen of Soul, Aretha Franklin, with some of music’s chart topping divas; Jennifer Hudson, Martina McBride, Florence Welch, Yolanda Adams and Christina Aguilera, which consisted of a medley of Aretha Franklin’s hits. As if things could not get any worse for Aguilera after her Superbowl mishap just one week ago, she slipped and fell directly after her Grammy performance, yikes! 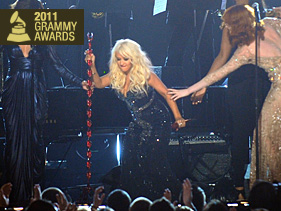 However, the show must go on and it did, with performances and collaborations with Eminem, Rihanna, Dr. Dre & Skylar Grey, Cee-Lo Green and surprise guest Gwyneth Paltrow, Usher, Jaden Smith and teen pop sensation Justin Bieber, Mick Jagger, Bob Dylan and Barbra Streisand. 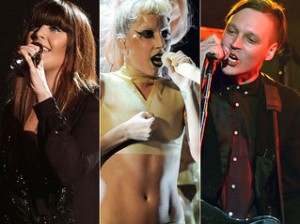 Even though the ever-flamboyant Lady Gaga went all-out, arriving at the 53rd Grammy Awards ceremony in an egg-shaped pod, it was country trio Lady antebellum who stole the show, scoring five Grammys. “This year changed everything for us,” said tearful co-vocalist Hillary Scott. The band’s ‘Need You Now’ earned them trophies for Best Country Song, Best Country Performance, Best Country Album, Song of the Year and Record of the Year.

No slouch herself, Lady Gaga grabbed three Grammys, one for Best Female Pop Vocal Performance and Best Short Form Video for ‘Bad Romance’ and Best Pop Vocal Album for ‘The Fame Monster.’ Rapper Jay-Z won three awards in the pre-telecast ceremony while Eminem, the most-nominated artist with 10 nods, picked up only two awards: Best Rap Album for ‘Recovery and Best Rap Solo Performance for “Not Afraid.” Bruno Mars picked up the Best Male Pop Vocal Performance award for “Just The Way You Are”, beating out favorites like Michael Jackson and Adam Lambert. Rihanna snagged the award for Best Dance Recording for “Only Girl (In The World)”, while eight time Grammy nominee, Fantasia, picked up her first ever Grammy in the Best Female R&B Vocal Performance category for “Bittersweet”. The Best Male R&B Vocal Performance went to platinum superstar Usher for his sultry hit song, “There Goes My Baby” and Usher also won another Grammy in the Best Contemporary R&B album category for his album, “Raymond V Raymond”.

The two upsets of the night came in the shape of a jazz bassist/singer and a Canadian indie-rock band. Esperanza Spalding won Best New Artist, beating out heavyweights Justin Bieber, Drake, Florence and The Machine and Mumford & Sons, while Arcade Fire were awarded Best Album for their 2010 break-out ‘The Surburbs,’ closing the show with the song ‘Ready to Start.’ 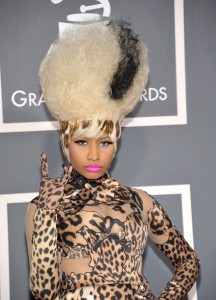 One thing about Nicki Minaj is she knows how to make a fashion statement, whether it is a good or bad one. What did you think of Nicki’s outfit? 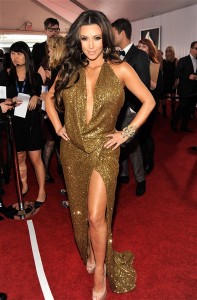 Someone who is always red carpet ready, reality TV star Kim Kardashian looked stunning in a gold Kaufman Franco dress. She wasnt even a nominee but she looked better than most of the nominees and performers in my opinion. 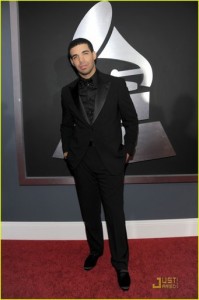 The always dapper Drizzy Drake is clad in an all black everything tuxedo. Can’t go wrong with that! 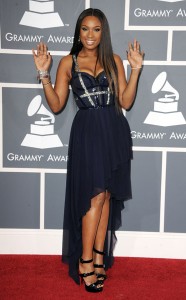 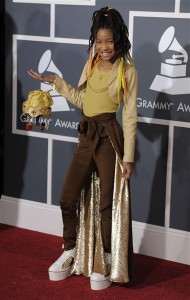