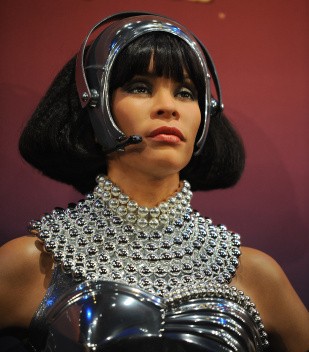 This weekend will make one year since pop princess’, Whitney Houston’s untimely death and what better way to celebrate her memory then to immortalize her in wax!

This week, Madame Tussauds unveiled four statues of the Guinness Book of World Records most awarded female act of all time.

The wax figures will appear in four of the most popular cities on the planet, New York, Washington D.C., Hollywood and Las Vegas, and boasts four of Whitney;s most iconic looks. 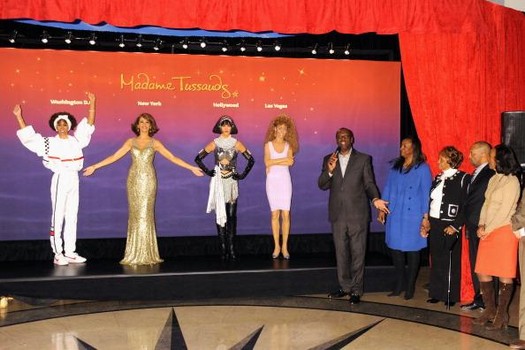 Whitney Houston’s family speaking at the unveiling of four of Houston’s statues.

“Mention Whitney Houston’s name and you can almost hear her performance of the ‘Star Spangled Banner’ at Super Bowl XXV, her incredibly powerful take on ‘I Will Always Love You,’ the soulful ‘I Look to You’ or the catchy hit ‘I Wanna Dance with Somebody,’ immediately playing in your head,” said Rosemary Preta, Director of Marketing, Midway USA, Merlin Entertainments Group. “She was a true and rare talent and we are exceedingly proud to be adding her wax likeness to our attractions in the United States.”

“I Look to You,” which was Houston’s first studio album in six years and her final recording, debuted at number one on the U.S. Billboard 200 — becoming her fourth number one album — and has gone on to sell more than 2.5 million copies worldwide. At Madame Tussauds New York, Houston is dressed in an elegant gold sequined floor-length gown that is equivalent to the one she wore in the photo shoot for “I Look To You”.

Madam Tussauds Washington, D.C.
The year was 1991 and Whitney Houston delivered one of the most stirring renditions of the “Star Spangled Banner” ever recorded at the start of Super Bowl XXV. It was a moment that held national significance due to the fact the U.S. was at war in the Persian Gulf and one that became a defining moment of her career. At Madame Tussauds Washington, D.C., Houston will be portrayed as she appeared on that day and dressed in a recreation of the white track suit with red, white and blue detailing that she wore with a white headband; even down to the red, white and blue Nike’s she wore. 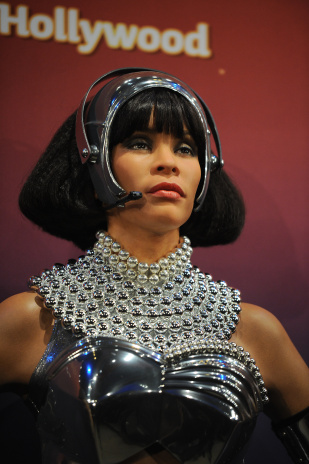 Whitney Houston as Rachel Marron in The Bodyguard film

In 1992, Houston took on her first major acting role when she starred as singer Rachel Marron in “The Bodyguard.” The film was a box office success, becoming the second highest grossing release of the year, and the soundtrack, which features Houston’s cover of “I Will Always Love You,” sold 45 million copies worldwide and has gone on to become the best-selling soundtrack of all time. At Madame Tussauds Hollywood, Houston is depicted as the movie’s main character, Rachel Marron, wearing a replica of the chromed-silver “Queen of the Night” costume she famously wore in the film. Warner Bros. kindly lent the original outfit to Madame Tussauds studio artists to ensure an exact recreation.

Madame Tussauds Las Vegas
The first single from Houston’s second studio album was titled “I Wanna Dance with Somebody (Who Loves Me)” and earned her the Grammy Award for Best Female Pop Vocal Performance at the 30th Grammy Awards in 1988. The song’s accompanying video became one of Houston’s best recognized music videos and ran in heavy rotation on MTV, VH1, and BET. At Madame Tussauds Las Vegas, Houston’s wax figure will be styled in the same way she appeared in the video, wearing a tight purple-pink tank dress and blonde curly hair. 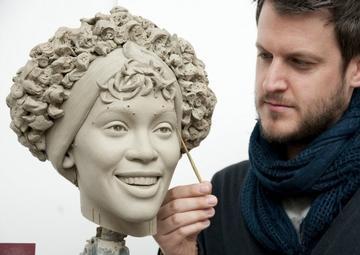