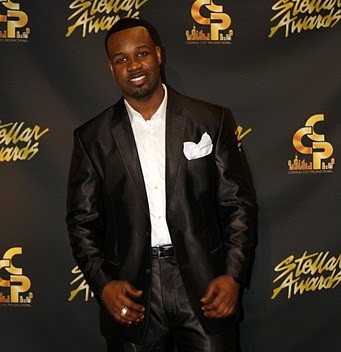 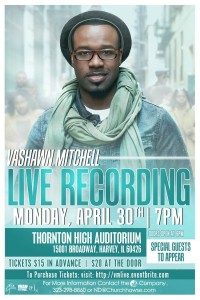 Last night, the Thornton High School in the suburbs of Chicago in Harvey, IL, was turned into an auditorium filled with praise and worship from beginning to end. Fresh off of the success of his 2010 smash hit “Triumphant”, Harvey native, VaShawn Mitchell, went back to his old stomping grounds to release a sound into the atmosphere and he did it in grand fashion.

It is not everyday that ANYONE gets a street named after them, much less a gospel artist, however, before the recording began the mayor of Harvey, Il (where VaShawn is from) saluted him with a street sign that read “VaShawn Mitchell Blvd” in front of thousands at Mitchell’s alma mater- Thornton High School.

Now it was time for the worship experience to begin and who better to usher in the presence than VaShawn’s friend and label mate, Tasha Cobbs. You know Tasha…the one who did all of those amazing riffs and ad libs on “Nobody Greater”. After Tasha blessed the crowd with her songs “with You” and Smile”, the “Prince of Praise”- Byron Cage introduced the man of hour, VaShawn Mitchell. As VaShawn entered the stage clad in a simple black suit and white shirt, he was followed by Anthony Brown and Friends, who provided the BGV’s.

The first two songs “Praise The Lord” and “God Is Faithful” were hand clapping praise and worship songs at it’s best and is sure to be favorites among Praise and Worship teams across the globe. But it was song number three, “Jesus Is The Greatest Man I Know” featuring Israel Houghton and written by Baltimore’s Steve Mckoy, that may just be a first or second single at best. Naturally, Israel’s smooth vocals and acoustic guitar takes the song to the next level. This song is so simple but the words hit you like a ton of bricks because if you really think about it, who is greater than Jesus? Although by the end of this song we were all assured that Jesus is indeed the greatest man we all know, VaShawn deemed it fitting for some reenforcement and immediately transitioned into his #1 hit, “Nobody Greater”. It was totally fitting!

Songs four and five, “Awesome God” and “His Record Is Good” kept the flow of the recording and further proved that there will definitely be life after “Triumphant”. Song number six, “Turning Around For Me”- penned by veteran V. Michael Mckay was the song that not only took us into intermission but also took us into pure worship mode as Anthony Brown and Tasha Cobbs tagged the song and made it their own.

During intermission, choirmaster- Ricky Dillard, did an impromtu version of his hit song “God Is Great” with Byron Cage and “Miss Speechless” herself, Anita Wilson. After a quick and more relaxed wardrobe change, VaShawn and crew continued with a song “Better Days”, which simply stated that “My status is changing, there’s no more decline, I’m on my way to better days”. Song number eight, “I Will”, written by the talented Mr. Rick Robinson (Speechless) had beautiful words but started off pretty slow in the beginning of the song, but that was until the incomparable Kierra Sheard graced the stage! KiKi breathed life into the song as only she can and her voice, riffs and anointing took us into another praise session. This song is sure to be a fan favorite.

After song number nine, “So Glad I Found You”, VaShawn introduced the most highly anticipated artists of the night to the stage as Fantasia and her mother Diane Barrino hit the stage. VaShawn warned the crowd that he had to take it old school and that he did with the 1990 Tramaine and Walter Hawkins classic, “The Potters House”. We all know Fantasia comes from the church and she showed and proved as her raspy alto brought new life into the song. Meanwhile, Mama Diane sang, prophesied and spoke in her heavenly language throughout the song. By the end of the song, both Fantasia and VaShawn was slain in the spirit; praising God like there was no tomorrow.

There are times when artists release classic albums and it can definitely be a gift and a curse. A gift because every artist wants that hit song or that album that stands the test of time. It can be a curse because in VaShawn’s case, how can you top a solid album like “Triumphant” and a smash hit like “Nobody Greater?” The bottom line is you can’t. You just continue to listen to God and continue to put a sound into the atmosphere that will change the world. From the sound of it, VaShawn Mitchell has done just that.

This is life after Triumphant.

My favorites and potential singles in my opinion: “Jesus Is The Greatest Man I Know”, “I Will”, “Turning Around For Me”, “Better Days” and “The Potters House”.

Disclaimer: Life After Triumphant is NOT the name of the new album.