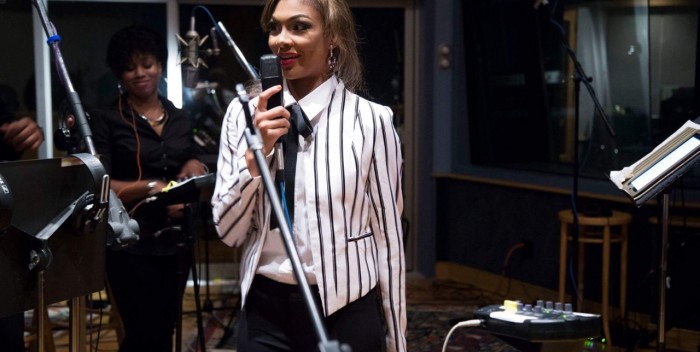 Soulful, spiritual and amazing are just a few of the adjectives fans of social media singing sensation Bri use to describe the Louisiana native’s riveting YouTube and Instagram performances. This past Monday, before an invitation-only audience of friends, family and music industry tastemakers, she recorded her first album – a powerful live session – at the legendary Doppler Studios in Atlanta, Georgia. “Bri tore the roof off the building,” laughs her manager Marquis Boone who organized the big event. “She really had a good night and I think her fans are going to really be pleased with this project.”

“I went to Bri’s recording not really knowing what to expect and I must say I was blown away,” says Jeff Hargrove, Vice President of Marketing & Promotions for Tyscot Records. “The recording was almost flawless and everything was on point from the vocals and musicians to the choice of songs. Although, she’s young, Bri has depth and maturity beyond her years. I’m excited to work with Marquis Boone and the rest of our collective teams to introduce her to the world.”

The ten-song collection “Keys To My Heart” (Marquis Boone Enterprises/Tyscot Records) is tentatively scheduled for release in 2016. It features a variety of melodic moods written specifically with Bri in mind with offerings by Stellar Award nominated recording artists Uncle Reece and Bryan Andrew Wilson. Khas Dock who co-wrote Bri’s hit “I’ll Be The One” contributed a new song and Bri herself wrote a passionate tune, “Jacob’s Song.” Korey Bowie, an artist in his own right who has collaborated with the likes of Casey J and Angie Stone, produced the entire set and wrote a couple of the songs too.

Bri was catapulted into the public eye last January when a friend posted a cell phone video of her singing “Make Me Over” on You Tube. Her fiery delivery earned her instant fans including celebrities ranging from Drake to Brandy. The video now has over 800,000 views and led to her current affiliations with Marquis Boone Enterprises and Tyscot Records. Her first release “I’ll Be The One” debuted at #1 on the Billboard Gospel Digital Songs Chart in June and was followed by “Holy Spirit” which hit the Top Ten a month later. Visit www.brination.org for more #Brination news and information.