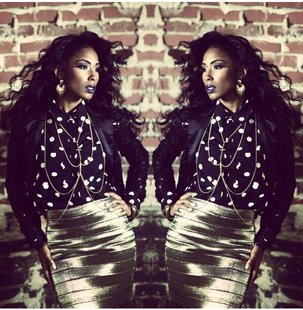 “I am intentional about my music having a message that points to the goodness of God, and to His grace,” says Johnson – who will record by the name She’nice. “I’m beyond excited to be a part of the RCA Inspiration family.”

She’nice, grew up in the music industry.  As a child her mother, acclaimed R&B singer Tweet, frequently took She’nice to the studio and on tour, so it was natural that she was bitten by the music bug.  A sought after vocalist, She’nice was in the studio with a platinum selling R&B artist about a year ago when God pricked her heart and she knew that God had a different purpose for her gift – and she has never looked back.  She is currently singing with Tye Tribbett.

“Vocally, She’nice is amazing. She is a young girl with an old soul, so she brings a uniquely youthful dynamic to the genre,” says RCA Inspiration Head of A&R Stanley Brown.  “I was first intrigued by She’nice when I saw her on TBN. She talked about having a love for hymns. I thought it was fascinating that a young woman had such a deep appreciation for Gospel music tradition. Putting her touch on that foundation will make She’nice stand out in the genre.”

“I am so proud of She’nice, she’s matured into a wonderful young woman and, really, I’m just blessed to have her as my daughter,” says Tweet.  “At first I was a little nervous about her being in the music business. But once she decided she would be singing for the Lord, I felt a lot better – I just didn’t know how the business side of things would be for her.  When I met the staff at RCA Inspiration and saw everyone’s passion and commitment, it helped me to rest easy because I know she will be in great hands.  I’m very excited for her.”

“Signing with RCA is a dream come true,” says She’nice. “When I said YES to God and HIS plan for my life, I had no doubt that He would open the right doors for me.  I’m looking forward to sharing my music with the world.”

New music from She’nice will hit the market soon!